The LA/B.C.-Based Company Created All of the Visual Effects for the Political Drama’s Fifth Season and Releases a VFX Breakdown Reel Showcasing Some of the Most Challenging CG Shots Crafted for the CBS Series.

VFX Legion recently wrapped the visual effects for the fifth season of the CBS’s series, ‘Madam Secretary.’ The LA and B.C.-based company assembled a team of over 30 artists to craft more than 100 visual effects for the show. The broad range of work includes a range of computer-generated shots, from large-scale green screens, and matte paintings to digital environments that are integral to the geopolitical issues that show’s storyline addresses.

This season of ‘Madam Secretary’ has been exciting right out the gate. The premiere episode begins with a bang, as a rocket-propelled grenade explodes in the Oval Office just as a pivotal agreement is about to be signed. Legion simulated dense smoke, clouds of dust and debris, adding to the chaos of the aftermath as the wounded struggle to find their way out of the rubble.

Creator, Writer and Head Producer, Barbara Hall’s political drama is shot in New York, with a storyline rooted in Washington, D.C. The logistics require Legion to craft photorealistic environments that replicate icon monuments, buildings, and locations in the nation’s capital, along with the variety of other visual effects that the show requires. A computer-generated shot of the White House viewed from the perspective of Pennsylvania Avenue, and the digital recreation of the Lincoln Memorial that syncs seamlessly with live-action footage are among the visual effects that enable scenarios to unfold in the nation’s capital.

The plight of the Syrian people is core to this season’s storyline. Secretary of State Elizabeth McCord (Téa Leoni) tries to broker deals for humanitarian aid with heads of state. She seeks out the Chinese Foreign Minister at a tech conference where she finds him immersed in a VR game.

Legion’s team created an entire CG virtual video game environment, replete with a horde of alien monsters that explode and shatter mid-air as

he enthusiastically fires on them. Match moving his performance, artists transferred it to an avatar playing the game inside its virtual world. Looped run cycles and interactive death animations unfolding in real-time were simulated in Houdini
and then rendered in Redshift.

A long establishing shot provides the ‘cold open’ for episode 506, jumping directly into the heart of the story with a hard-hitting scene with hundreds of desperate Syrians flooding the Turkish border seeking refuge. Originally shot in NY State, the producers called on VFX Legion to bolster the number of displaced men, women and children in the practical footage. The studio’s matte painters, compositors, and CG artists augmented the sequence, building a large crowd of refugees 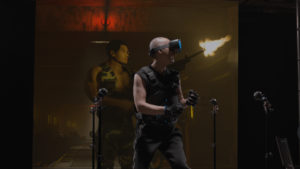 that reflect the scale of the mass exodus.

When producers discovered that the number of people on the naval vessel that was relocating them during this natural disaster needed bulking up, they scheduled a second unit shoot with Legion’s VFX Supervisor David Isyomin on set directing the action to ensure that the footage aligned with CGI. Artists then Rotoscoped out the entire foreground and added the sky, along with the additional people during the compositing of the scene.

Legion added to the realism of the computer-generated bombing of the presidential palace in Nicaragua with digital fire, debris and other elements simulated in Houdini. Its team built on existing assets from ActionVFX’s library, eliminating the need to create each shot from scratch

and maximizing cost-effectiveness. Another scenario focused on global warming called for a computer-generated C-130 Hercules military transport aircraft flying through a hurricane that was simulated in Houdini, rendered in Redshift and lit in Maya.

The most visual effects-driven episode of the season, aptly titled ‘Proxy War,’ required over a

dozen complex shots – from a large set extension and a computer-generated abandoned, shelled-out lot in Syria, to detailed matte paintings that stand in for the demolished buildings in the background. The digital environment is the setting for children playing football when their laughter turns to terror as they hear the sound of a cluster bomb just before impact. A scene opening with officials walking through the take-off of a CG MiG aircraft via satellite and ends as they drop the cluster bomb.

‘Madam Secretary’ shines a light on an issue ripped from today’s headlines in an episode that opens with a Mexican woman and her young sonas their long trek through the Sonoran Desert ends as they reach the US border. After assurances of help from the border patrol, the scene closes with the mother’s arrested as the son boards a bus headed to a detention center. The establishing environments, a barren desert landscape and the parking lot of a US sheriff’s office, were created by Legion’s Matt Painter Marc Adamson and Compositor Eugen Olsen. Ruy Delgado handled the camera all of the match moves in the scene.

Based in Burbank and British Columbia, VFX Legion specializes in providing episodic television shows and feature films with high-quality visual effects that get the most out of every budget. Launched in 2013 with a pioneering pipeline at its core, Founder, CD, Senior Visual Effects Supervisor, James David Hattin, and the studio’s veteran management team, support staff work with a collective of 80+ skilled VFX artists as a single unit, meeting the challenge of high shot counts and tight deadlines for multiple projects.

Legion’s work includes TV series, such as ‘How to Get Away with Murder,’ ‘Madam Secretary,’ ‘’Scandal,’ Suits,’ ‘El Chapo,’ ‘Eye Candy,’ ‘Revolution,’ and ‘Gone,’ to name a few. ‘Hardcore Henry,’ ‘Sinister 2,’ ‘The Purge: Election Year’ and ‘The Purge: Anarchy’ are among the studio’s film credits. The company is currently wrapping up work on a new feature film out of Blumhouse Productions. For more information about VFX Legion and its services visit , [email protected] or call 818.736.5855.