So impressed with the performance of the Motion Impossible AGITO modular remote dolly systems, that BET Awards director Glenn Weiss asked for two AGITO Trax systems for the live telecast of the 2021 American Music Awards (AMAs) on November 21 from the Microsoft Theater in Los Angeles.

“Glenn loved the dynamic shots that the AGITO provided on the BET Awards, so he decided to use two of them on the AMAs,” according to multiple AGITO owner John Perry of Los Angeles. “Once a director or producer sees the AGITO in action, they always want it for their next show. Glenn is already requesting multiple AGITO dollies for his next awards show.” Perry also just finished the live dual broadcast of the E! People’s Choice Awards 2021 from the Barker Hangar in Santa Monica that aired on both NBC and sister network E! on December 7.  The People’s Choice Awards was directed by Ryan Polito who used the AGITO for the first time on the show last year and then again, this year. 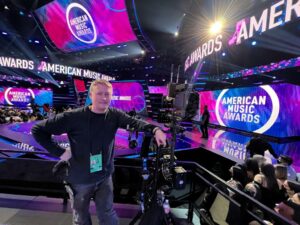 For the AMAs, Perry provided the two AGITO Trax systems on a custom-built track, plus what he refers to as the “blade” attachment for both AGITOs. “The two custom tracks were built to match the curves of the unique AMA stage design, with both AGITOs traveling through tunnels in certain parts of the thrusts using our custom blade attachments,” said Perry. “The blade allows the camera to stay above stage level and the AGITO base to be under the stage in tunnels, minimizing our visibility footprint in the wide shots. Best of all, our blade attachments only require a 1-inch gap in the stage, which allows the artists to perform across all areas of the stage without interruption.”

Perry has been working for Dick Clark Production – now DCP Rights, LLC – the production company responsible for the AMAs for several decades. “I started as a Steadicam operator on countless series, awards shows, and specials. In recent years, I’ve integrated the AGITO dollies on several of these live shows with great success. It’s a very dynamic tool, especially for live entertainment.” 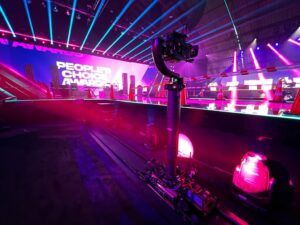 For the AMAs, the AGITO pilots – who wirelessly control the dollies – were Cody Alderman and Daniel Schade. The AGITO operators – wirelessly controlling the SHOTOVER G1 gyro-stabilized gimbals with Sony HDC-P50 cameras were Danny Bonilla and Danny Webb. Setup took one day, with three days of rehearsals.

Just how high did the cameras go with John Perry’s custom blade attachments? “For both cameras, we had lens heights from six to nine feet from the floor,” said Perry.