That meant that Weiss, through DCP Rights, LLC (formerly Dick Clark Productions), requested all four AGITOs from John Perry of Los Angeles for the March 7th production from Allegiant Stadium in Las Vegas. 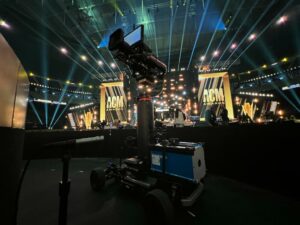 “Glenn loved the AGITIOs, as he always does,” said Perry. “He’s a repeat client, and keeps upping his creative game adding more AGITOs every time.” Perry, who owns the AGITO systems, was recently with Weiss for both the American Music Awards and the BET Awards.

According to Perry, the stages for the ACM Awards was designed specifically to integrate the four AGITOs as they would be an important part of the look of the show. 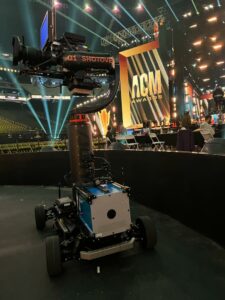 Given two days for setup and three days of rehearsal, each of the four stages had an AGITO assigned to it. Two AGITO with Trax drive ends were on a straight track – one of which had two ARRI heads, a third completely wireless AGITO Trax was on a custom-made curved track, and the fourth AGITO had a Sports drive end for the ability to free-roam. The lift for the cameras ranged from 4-7 feet.

“It’s great when a director loves using the AGITO so much, that they keep asking for more systems,” said Rob Drewett, CEO and Co-Founder of Motion Impossible. “We can’t wait to see what John puts together next.” 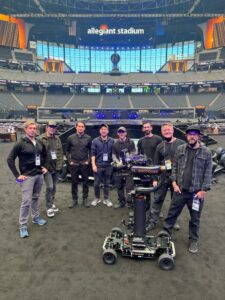