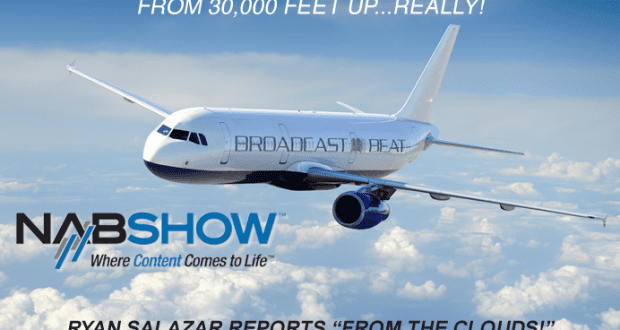 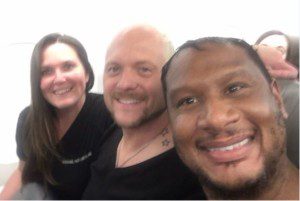 Our Fort Lauderdale crew is now thirty-thousand feet up in the air and we’re on our way to “Sin City” – Las Vegas, Nevada! NAB Show HERE WE COME! (Daniel – those are Nikki’s nachos!!!)

As usual, my level of excitement won’t let me settle-down, so I’ve started blogging while on the plane! (This is DEFINITELY a bad habit!!!)

(Sean – if you can’t fit your bag into the overhead, it’ll just have to dangle from the back of the plane!)

The most exciting thing this year (for me) – is that Broadcast Beat is producing NAB Show LIVE and we are expected to have over one million online viewers! 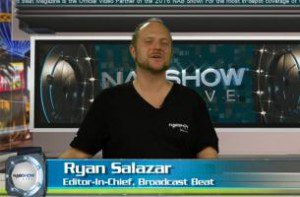 of NAB Show‘s onsite digital content production. Featuring social media and broadcast teams, @NABShowStudio1 is where to see broadcasts of NAB Show Live!, Social meet-ups and celebrity sightings. Live feeds, on-the-floor “field” reporting and archived show content – in addition to news and exhibitor information shown on a Digital Content Network rotating on multiple screens throughout the convention center and on the Show Floor in the [email protected]  We are broadcasting online at www.nabshow.com and broadcastbeat.com at the following days/times:

We also have lots of Pre-NAB Show videos on our website at www.broadcastbeat.com/videos/

Check-out Broadcast Beat Magazine – with over 200 pages of NAB Show!  The newest issue has JUST been published – see it at: magazine.broadcastbeat.com/

(I need to switch seats with somebody – come-on, you guys! One of you swap with me!!!)

Want to see what we see – as we’re seeing it? Then, you have to try viewing it on either instagram.com/broadcastbeatmagazine or check-out the live blogging at www.broadcastbeat.com!

Why settle for “plain ol’ reality” when Augmented and Virtual reality are available? Media venues are expanding globally with new technologies and markets constantly appearing. Alternate realities are becoming more and more readily available to manufacturers and consumers alike. The NAB Show is the place to discover the direction of modern media.  Change reality, participate in history, and expand your mind. Join the wave of the future and explore the growing opportunities and worlds offered by virtual reality.

Some A-list companies are contributing new tech to the NAB Show‘s Virtual & Augmented Reality Pavilion. Heighten your profits and your minds as we explore these fantastic new products:

Argon Design brings us the Argon 360, this vision sphere just oozes quality.  Sometimes thinking inside the box (or in this case inside the sphere) can bring positive results. The hardware platform has its images combined with video stitching (in true time!) The system will have multiple live demonstrations at the NAB Show. The Argon has it all; power efficiency, wrap around panoramic view, & live screen action cams. This scalable solution is top notch

The Center for Human-centered Interaction for Coexistence (CHIC) burst onto the scene in South Korea in 2010.  Since that time, it’s been making huge strides in VR for broadcasting and medical uses. They are measuring their own success at this with a self-imposed scale they call the 10 Levels of Coexistence Reality they are working on some seriously amazing stuff like a bionic human interface for recreating senses and emotions. Their researchers have written numerous medical papers touching on use of bionics and how humans process information. Right now, they have a nifty head mounted VR display, it’s really quite (dare I say it?) chic.

Dashwood Cinema Solutions has been making its presence known since 2009 in the post-production community. VR software solutions like the Stereo3D Toolbox and Stereo3D CAT have generated numerous awards, being noted for their new options like true stereo360 rendering and economy versions of 360° cameras. NAB 2016 will feature the360VR Toolbox virtual editing with Oculus Rift DK2 Picture – a professional 360° video plug-in suite for Premiere Pro, After Effects and FCP, this sweet software from an award winning company is sure to bring another layer of realism to your studios VR capabilities.

Experience 360° is all about the VR.  Content Creators can always use the software and services of a good full service production company that specializes in augmented reality.  Let them help you achieve maximum workflow on your latest VR project!  Don’t just make a film for your audience, craft an experience! Ascape, Capital, Fuse, & GoPro and are just a few of Experience 360°’s satisfied customers

Swing by Kodak’s booth and checkout their 360° cameras! The SP360 4K and SP360 1080p VR cameras. Don’t forget to take a peek at the PIXPRO Stitch Software either! Create a fully 360° seamless spherical video! Kodak’s award-winning products have been a mainstay of the visual arts for decades. Experience VR the Kodak way.

VR sports? What’s not to love? LiveLike brings you outstanding VR adapted to the social sports viewing. Experience replay, stats and commentary capabilities, multiple camera views and so much more. Enjoy a VR VIP view from a VR skybox, with a much more immersive viewing activating during key plays. LiveLike is even working on a little something special for fantasy sports fans.

Sphericam Is the first of its kind, a professional grade 360º Video Camera designed specifically for Virtual Reality. The Sphericam 2 is a 4K resolution camera with 60 FPS the size of a baseball. Designed for plug and play, this 360º is leading the charge into the future of VR. Ideal for your studio and live streaming needs.

Voke VR technology produces super Hi-def VR headsets that let you look around at will, combine that with the Voke share social media programs. Combine that with Voke Surround, a proprietary 180 to 360 video designed & created by Voke that operates in excess of 1800 pixels.

That’s not all! Other exhibitors include such tech leaders as 360Heros, ASSIMILATE, Back-Bone Gear Inc., DEEP Inc., Freedom360 LLC, GETSHOWY.COM, KonceptVR, Mettle, NexStreaming, NextVR, Nokia USA Inc., OwlReality, and Voysys. That’s just who’s signed up so far – there could still be even more! Why settle for ‘basic’ reality when you can make reality? 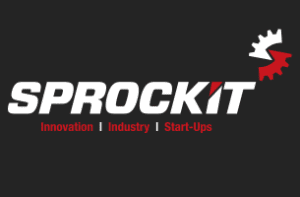 The continuing success of the NAB shows’ SPROCKIT program helps bring fresh ideas to the industry with the showcasing of the most dynamic handpicked start-ups. Sometimes new technologies have the potential to disrupt the industry; if that product’s advantages are worth the chaos their introduction might cause the industry, chances are that nextgen media tech will pass through SPROCKIT.  Ten SPROKIT startups from this year’s Vegas NAB are:

Amplives’ revolutionary approach in providing their service has landed them a slot at this year’s SPROCKIT. Their service enhances the distribution & delivery of your online video with the application of Mobile TV/Video Management and Online Platforms/Applications while utilizing Mobile Video Distribution Technologies to maximize audience targeting on your streaming webcast.

Utilizing automation to sort your metadata Appiness can make interactive video that allows the recognition of Brands, Characters, and products. What if this service was 13 times faster and 8 times cheaper than the most similar alternatives? Appiness currently has 2 products; the Spott app which allows consumer/viewers the ability to find and potentially purchase items online as they are viewed in truetime on streaming video.  Like a pair of shoes one of the characters in a movie or show is wearing? Activate the app, and click on the characters shoes and Spott will find out where you can get them! Apptvate is the seller’s side of this thrilling new technology, a program (even a live program) is run thru this service to enable it to operate on the consumer’s side with the help of the Spott app.

Crowdynews has the largest (and coolest?) social media curation platform.  Publicly generated social media can be rapidly sorted thru and pertinent clips can then be made available to your audience. Usable in real time your preset filters can ensure that the crowd sourced media found is both socially acceptable and relevant to the message or image you wish to convey.

Nervve’s visual search technology allows its users to rapidly find events, scenes, and/or specific objects easily.  This software can be equally useful to both media and law enforcement. Existing and public media may thus be used or reused to generate carefully filtered additional content.

OwnLocal combines their revolutionary platform with input from over twenty-five hundred local media companies to allow their customers to convert data in the form of print, radio, and television ads into online marketing, allowing users the potential to up-sell by helping spread their message across multiple mediums.

Gain global access to live video, or broadcast from any location on the planet via the Stream app with your phone.  Combine clips to share with your friends or audience. Ideal for both the layman and broadcast professionals.

Easily combined with or fit into existing workflows the System 73 video broadcast system increasing the user’s options without requiring any additional hardware. System 73 speeds online transmission by finding the best digital route to the end-user.

The trueAnthem software allows users to find their most effect content and then deliver that content to the widest possible interested audience for their digital materials, thus helping increase the chance of a more viral spread.

TVision Insights amazing new tech measures audience interest by a combination of anonymous viewing patterns, eyes on the screen, and smiling in the audience.  Machine vision helps keep track of whose actually watching the screen. The company then also provides a rating service based on this information.

The proprietary Vigour Video technology platform uses a single codebase to target all connected devices. Alternate devices are flawlessly connected to, and interface with, each other device connected via their cloud service.   This can help content providers by not requiring physical connection between devices. Vigour Videos cloud is adjusted to handle 3rd party apps to produce the most connective environment. A concept the company uses called ‘contextual multiscreen’ helps screen images effectively meld together based on the parameters of their use.

The SPROCKIT program is composed of corporate and entertainment executives and helps spotlight the innovations that effect broadcasting. It’s a Bi-partite program, with the NAB show providing the SPROCKIT program with a showcase, and a sequence of private meetings for the programs participants that are carried out in Los Angeles, the Silicon Valley, and New York.  Maybe your company or product has what it takes to be part of this program! Check it out!

I’ve got to go – the flight attendants have asked for “Airplane Mode” – whatever THAT is!  I really must find out… LOL – Don’t forget to tune-in on Monday April 18th!