It is mostly common sense, but before beginning any complex video production it is best to pre-visualize each shot in advance. Storyboarding — as this process is called — is a proven, age-old technique used by veteran directors since the beginning of motion pictures

The great film director, Alfred Hitchcock, used storyboards to pre-map his productions down to the finest detail. Hitchcock often didn’t bother to look through the camera’s viewfinder on the set, since he felt no need to. His film was already conceived before the camera started rolling.

Whatever you think of Hitchcock’s pre-production technique, his films have certainly stood the test of time. When making any video with complex shots or sequences of shots, storyboards are a very good idea.

Professional storyboard artists exist for big budget productions (yes, they are expensive), but basic drawing skills are desirable for low budget video directors pre-planning a shoot. What’s most important is understanding how to turn the director’s ideas for visual storytelling into drawn sketches. The quality of the artwork is not nearly as important as communication of the ideas themselves. Even crude stick figures will do the job.

When a shot or sequence of shots requires serious visual effects, or when a camera has to make very precise moves, storyboards become essential. Without them, it is easy for a crew to get lost in the process.

How do storyboards differ from shot lists? As we said earlier, a storyboard is a series of sketches that represent the different shots in a scene. Each panel of the storyboard depicts the angle and composition of a shot. By arranging these drawn images in a sequence, a storyboard illustrates how a scene will play on screen.

Shot lists are slightly different. These are a list — usually written on index cards — of each shot needed for a particular scene. The idea is to juggle them around to determine the order in which to shoot each component of a film. Storyboards and shot lists work together.

The director’s job is to translate the written words of a script into compelling visual images that effectively tell a story. At every moment, he or she must focus the audience’s attention on the most important part of a scene. 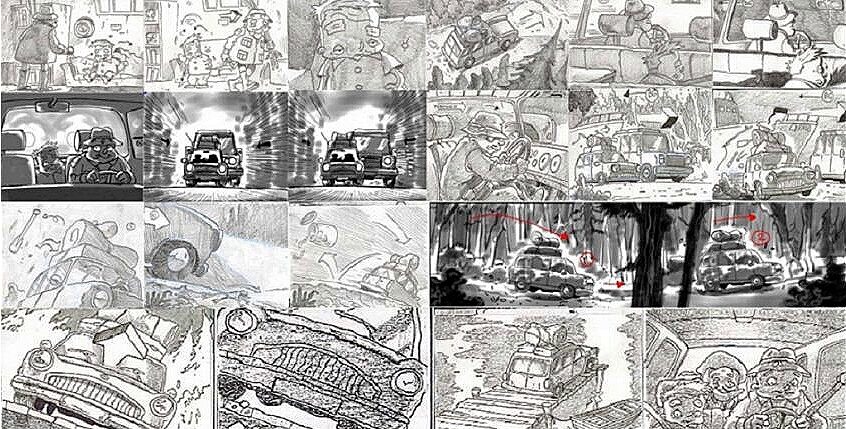 For example, take a handoff of a small package by two seeming strangers on a busy street. The scene appears on the surface to be simple. What is a slight brush between two people is actually the transfer of a package. This can easily be covered by a master shot, but the audience may not clearly see the transfer action in a wide shot. A story board can help design a series of cutaway shots to make sure the audience clearly sees this clandestine exchange.

The way to begin the whole storyboarding process is by creating a shot list on a series of index cards. Each card describes a single shot. It may be a close-up, medium or wide shot — be sure to say which. Also, include any lines of dialog, effects, effects or props important to the scene.

These index cards allow the storyteller (or director) to realign the various shots to create a non-linear layout, if it is desired. Creating a shot-by-shot list helps pre-visualize all the cinematic events in a story before the camera rolls.

This is different from the final order of shots in the edited production. For example, a director on a tight budget may want to shoot all the scenes at a single location with one equipment set-up, though the scenes may appear at different times in the final production. This efficient use of crew and resources can save time and money.

The next step, depending on the type of production and the director, is to turn the shot list into a storyboard. Make crude drawn sketches from each index card. Use arrows to show camera movement. When this process is finished, everyone on the set will have a clear idea of how each shot relates to the others and to the overall flow of the scene.

Storyboards and shot lists are essential tools to make it easier to communicate story ideas to everyone involved in a production. It can save hours of time on a set and create fewer problems later in editing.

In this age of computers, there is software to make the shot list and storyboarding process less tedious than manual, hand-drawing. One solution is Martini (www.martiniquickshot.com/), a post-production plug-in designed for pre-visualization. It was designed to bridge the gap between scenes not yet shot and the final edit. It will be up to the user to determine how well it or other storyboarding software works.

Regardless of how it is done, effective storyboarding makes it easier to share a director’s visual creativity with the people who will help achieve it. Storyboarding is also an excellent way to save time and maximize the budget.

Production pre-planning may not be the fun part of the process, but it is one of the most valuable tools available to any director.