Part of the fun of filmmaking is finding creative avenues around resource challenges. In 2007, we began production on a short film that provided us with plenty of those challenges, and we had to get “crafty” in our solutions, literally. 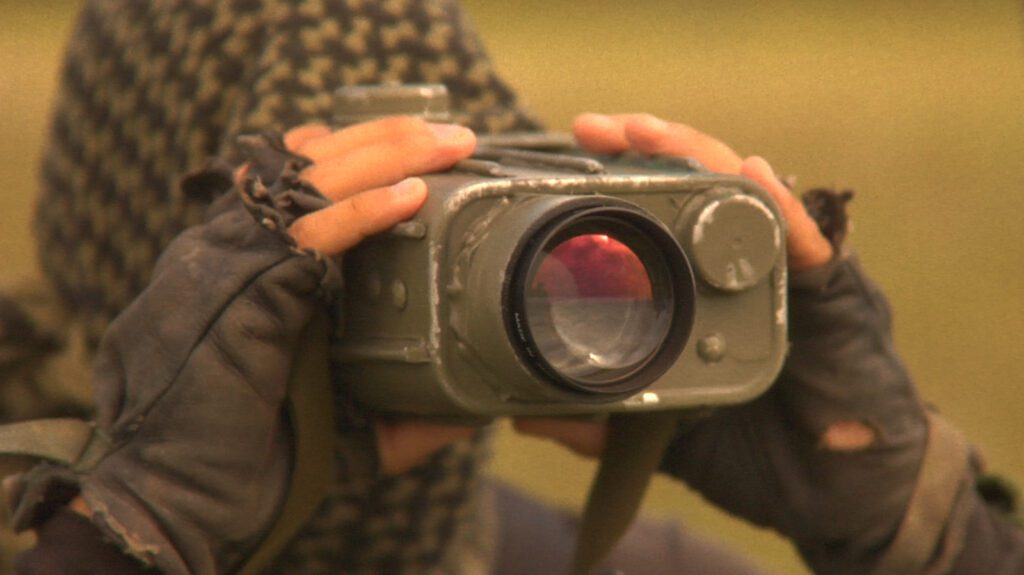 It was a short film featuring an assassin infiltrating a fictional military base, sneaking past sentries, and reaching his target; the General. We wanted a project to experiment with camera moves, lighting, prop-making, and sharpen our location shooting. It was less plot and more “let’s-see-what-we-could-pull-off.”

As was typical, our budget was minuscule, but we were lucky enough to find a local airport willing (and curious enough) to allow us to use their location as the army base. The small allowance we had put aside was just enough to cover the primary cast, crew, production insurance, police supervision, meals, and the loose change we had after that was what we had for the props and wardrobe. Most of the wardrobe we already either had or acquired from thrift shops. However, we still needed a knife for the assassin, some old firearms, a bomb, and an advanced monocular scope device.

We had about $100, some household products, and a bottle of mustard (which was more important than one would initially think). 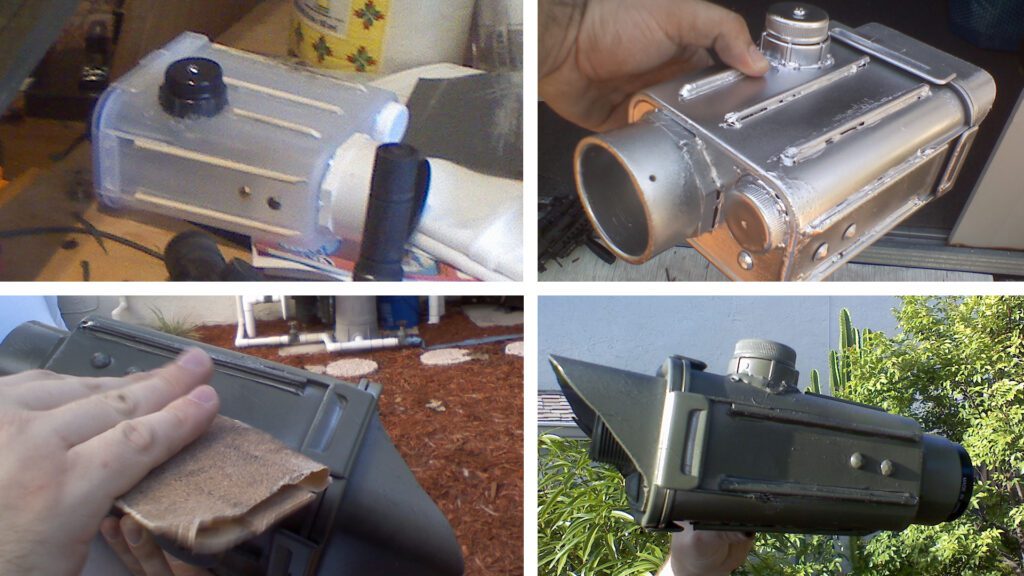 We needed our assassin to have a fictional, high-tech, long-range scope. We weren’t going to find anything like that thrifting, so we decided to build a fictional model from scratch. We were limited in selecting what we could locate around the house.

The first thing to do is find the foundation you’ll build the rest of the prop upon. For this, we found a plastic powdered juice container in the recycling that was boxy and oblong and about the size of a pair of binoculars. After raiding toolboxes, closets, and product packaging, we had enough “accessories” to construct our monocular.

We placed the cap onto the powered drink contain, and then we cut thin wooden dowels and glued them vertically along the sides. We then gathered some PVC pipe rings and Gatorade caps and bolted those to the tub with a few extra random screws. We cut a visor from the bottom of a cardboard box, found a PVC connector just large enough for us to plug an old photography lens into, and then fastened them all together.

We painted the entire prop a metallic silver and put it aside to dry.

Taking the same approach as the monocular, we resorted to spare household products to build a fake explosive the assassin would use at the end. We started with a small rectangular cardboard box and spray-painted it matte black. For “components,” we hit our old computer bin, pulled out fans, external hard drive cases, and circuit boards, and duct taped them around our “device.” We placed a digital cherry on top with a switch and little red LED light that would blink when the device was “triggered.”

Unlike the monocular, this prop would get much less screen time and be mostly obscured. After a light sandpaper treatment to the edges of the parts, we slipped the entire thing inside of an old satchel bag so that mainly the top portion was visible. The bulk shape of the box, the slight sanding of the parts, the old satchel bag, and an actor that was able to pretend it had bulk completely sold the effect. 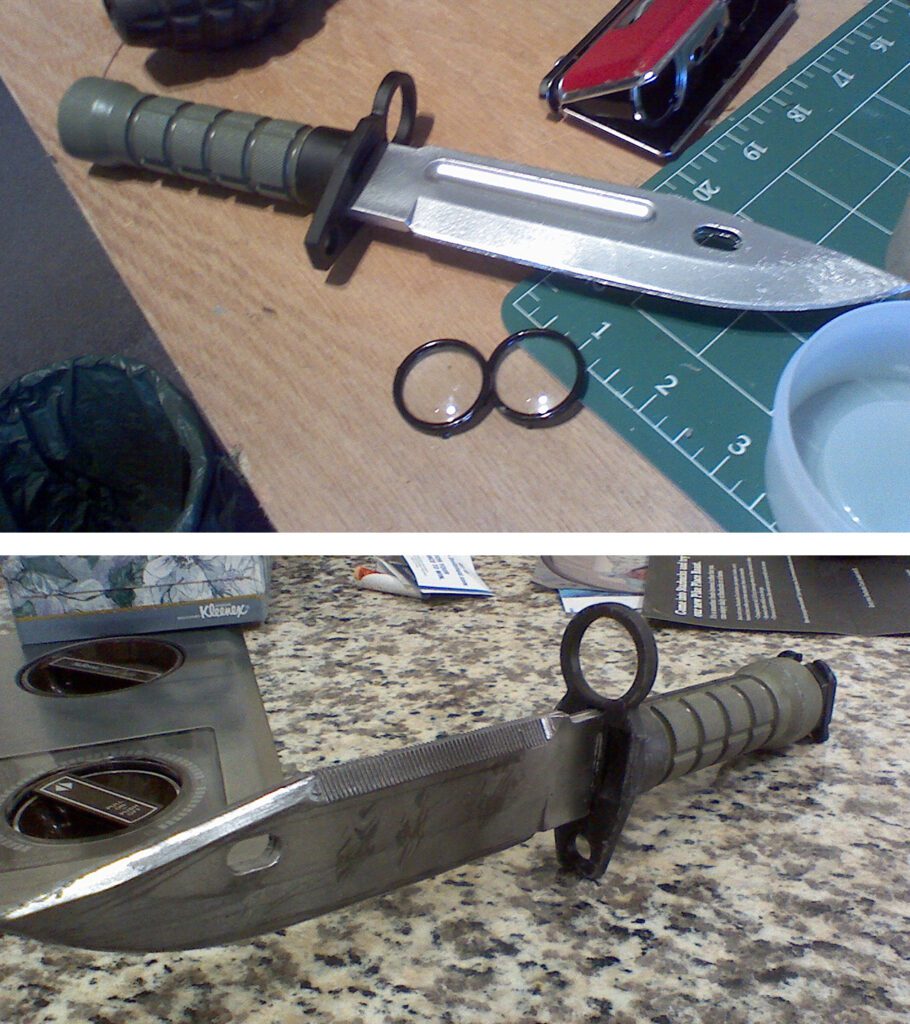 With the satchel device completed, we had to age the monocular and the prop weapons. With the little funds we had, we were able to pick up some used, low-end airsoft guns and a fake black rubber knife. Despite looking fake and plastic, they were perfect.

For the knife, we removed the plastic handle, painted the entire rubber blade with metallic silver, painted the handle green, and reassembled the pieces. Now it looked like a brand new shiny metal object. After a few light coats of matte grey with some black dusting and a little sanding, we now had a safe rubber knife that looked straight out of a Rambo film.

It was time to bring out the mustard for the monocular and airsoft guns. Mustard, toothpaste and other products that apply thick, dry fast, and flake off are perfect for adding a weathered effect to metal props.

We applied the mustard strategically to the spots on the monocular we wanted to show extreme wear. On the airsoft rifles, we sanded down and scuffed up the plastic, and we applied a layer of matte grey paint to the portions that were supposed to be metal. We then dabbed applications of mustard.

Once the mustard was dry on all the props, we covered the monocular in a solid army green paint and a matte black on the airsoft rifles.

After letting the items dry for about a day, we returned to finish the treatment. With sandpaper in hand, we lightly rubbed the mustard applications until they began to flake off. This resulted in what appeared to be old paint chipping away, exposing the metal coat. For added benefit, we lightly ran the sandpaper over various parts of the monocular to add some extra scuffs and scratches, to enhance the character.

At the end of the day and just in time for production, we now had fake plastic weapons that looked like old scuffed-up metal, a cardboard box and old computer parts that looked like a bomb, and a Kindergarten-esque craft project that looked somehow looked convincingly like a fictional scope device.

The expression, “one man’s trash is another man’s treasure,” can certainly hold true when it comes to filmmaking and production.