According to Brian Parker, digital media instructor, the two-year program at Bates prepares students for entry-level positions in digital media. The immersive curriculum includes hands-on projects as well as the opportunity to work with college-owned PBS member station KBTC and government 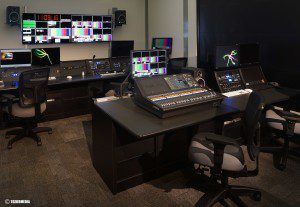 channel Pierce Bates Technical College-1County Television (PCTV), both of which are based on campus. “What most schools do in three years we do in 18 months,” he said.

The new two-story, 55,000-square-foot building features a modern, open architecture. It was built next to the KBTC and PCTV facility, which had been retrofitted as a training studio 15 years ago by ABS. “We needed to come up with a world-class facility so we could be right on the pulse of what’s happening in the industry,” Parker said, “and I believe we’ve done that successfully.”
Beyond instruction, the new studio is available for rental, generating capital for the school and training opportunities for its students. It features three Grass Valley Focus 70 Live CMOS cameras, two on pedestals with prompters and a third on a jib, each paired with a FUJINON 20x HD lens. The lighting grid offers a mix of daylight-balanced Kino Flo fluorescent, Litepanels LED, and ETC lighting instruments. However, Bates brought a few legacy scoops and other lights to the new studio for training purposes.

In the old building, the traditional control room had insufficient space for extra bodies. The new control room is oversized to accommodate a complete crew as well as a class of students.

“It’s really great to have that much space,” Parker said. “Now, you can gather three or four people around each station, so students are shadowing the operators.”

For audio, ABS installed a Yamaha QL5 digital mixing console. Each channel can be recorded discretely for training purposes. When students mix a live music show, for example, the recording can be reviewed, mistakes identified, and performance remixed in Avid Pro Tools.
Similarly, every camera can be ISO recorded to an AJA Ki Pro and the director’s instructions can be recorded from the Clear-Com intercom. After a production is complete, the program can be reviewed to discuss directing choices and terminology. Parker said Ross switchers are popular among the local Bates Technical College-2broadcasters, so ABS installed a Ross Carbonite Black switcher and Ross XPression Prime for graphics. Fiber ports throughout the new building allow cameras to be input directly into the switcher.

ABS also built a central equipment room, which includes a Ross 16×16 SDI routing system, BrightSign XD1132 interactive media player, and Tightrope Media Systems Carousel 250 content management system. “ABS did a really great job. All the patches are right in front of you, so you don’t have to go behind the racks,” Parker noted.

“Public institutions rarely get to upgrade their video production facilities, let alone move into a brand-new facility, so the Digital Media Program at Bates Technical College wanted to make the most out of this opportunity,” said Mark Siegel, president of ABS. “The new workspaces accommodate a full class of students. We also installed fluorescent and LED lights in the studio to support their green initiative, and included high-quality components in the control room so students and outside clients can achieve professional results.”

After more than a month in the new facility, Parker said his students have already recorded an interview program and are moving toward more advanced productions. “It’s awesome,” he added. “We’re able to do stuff we were unable to do before.”

Parker said ABS handled the project professionally. “The management team is really good with listening,” he explained. “They could decipher what we would say and come back with an answer. They’re great, knowledgeable, and very willing to share their information. The ABS team did us well.”

“We are so pleased to work with Advanced Broadcast Solutions on equipping and integrating our Advance Technology Center’s Digital Media Studio,” added Ed Ulman, KBTC Public Television general manager and dean of instruction for the Broadcast Video, Audio, Engineering, and Digital Media programs. “ABS always over delivers because when it comes to education installations, they want to ensure students and instructors have the best solution the budget will allow.”

About ABS:
Based in SeaTac, WA, ABS (Advanced Broadcast Solutions) delivers customized, technologically superior solutions for broadcast, corporate, house of worship, entertainment, government and educational facilities – from design and integration to installation and support services. Since 1992, its experienced technical staff has installed more than 1,500 systems worldwide. For more information, call (206) 870-0244 or visit www.advancedbroadcastsolutions.com.