We often think of closed captions as only for the hard of hearing. But, perhaps surprisingly, this is not true. Researchers in the UK have determined that 80 percent of people who view closed captions don’t have a hearing impairment at all.

Closed captioning got its start for the hearing impaired. It was first demonstrated in the United States in 1971 at the First National Conference on Television for the Hearing Impaired in Nashville. The first broadcast was in 1973 by PBS at WETA-TV in Washington, D.C.

Real-time captioning — a process for captioning live broadcasts — was developed by the National Captioning Institute in 1982. In the early days of real-time captioning, stenotype operators who were able to type at speeds of over 225 words per minute provided captions for live television programs.

One of the key modern uses of captioning is to allow social media search engines to index video content, raising a video’s SEO. Caption or .SRT files added to videos (as opposed to auto-generated or open captions) are indexed by Google. Due to the silent auto-play setting on many social networks, videos can convey their message without requiring the viewer to listen to the sound. Captions allow the audience to watch the video in silence, while still being able to comprehend all of the spoken words.

Captions also grab the audiences’ attention, keeping their eyes on the video long enough for it to make an impact. Facebook cites a 12 percent increase in video viewing time for captioned video ads. Users of the social media site who normally would have scrolled past ads stopped and watched because of captions. 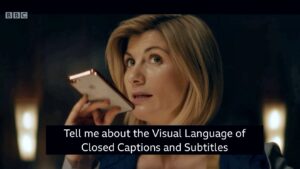 First, let’s define the difference between captions and subtitles. Captions are timed text shown on screen used to communicate spoken content and sound effects as the video plays. These can be open or closed. Closed captions are separately uploaded files and can be turned on and off and are searchable. Open captions are edited into the video and can’t be turned off.

On the other hand, subtitles are translations for people who don’t speak the language of the original program. These are commonly used to translate foreign films into other languages. Subtitles of translated languages are usually faster and more cost-effective to create than recording different audio for each language being targeted. 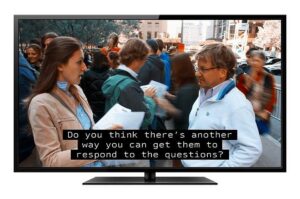 The Americans with Disabilities Act, the Federal Communications Commission and the international Web Content Accessibility Guidelines all now require captions for multimedia programming. These laws and guidelines were designed prevent discrimination against people with hearing disabilities.

Estimates are that more than 28 million Americans are deaf or hard of hearing. Internet videos are global, so the deaf community around the world is about ten times greater than the U.S. alone. It has been estimated that a total of five percent of the world’s population is hearing impaired to some degree.

This makes subtitling the easiest way to reach global audiences with video content. Chinese speakers make up 19.9 percent of the world’s population followed by Spanish at 8.1 percent and Arabic at 4.9 percent.

Captions also improve the comprehension and engagement level for educational and instructional videos. When watching a video of a class with captions is like taking notes from a lecture. Research has found that student engagement with educational video increased by almost 30 percent when it is captioned. 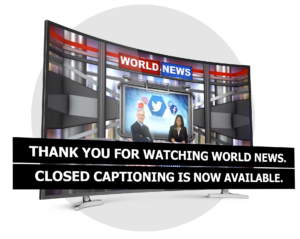 Verizon researchers have found that 50 percent of its subscribers usually watch video without sound – rising to 69 percent when watching the programming in public places. They also found that 80 percent of viewers are more likely to watch an entire video when captions are available.

Putting captions or subtitles on a video is no longer expensive. Many companies specialize in the service or dozens of web-based vendors do it for as little as $1.50 per minute with an uploaded video. Some online services are even free.

Today, captions and subtitles make a major difference in viewership and should no longer be considered a specialty only to aid accessibility for the hearing impaired.