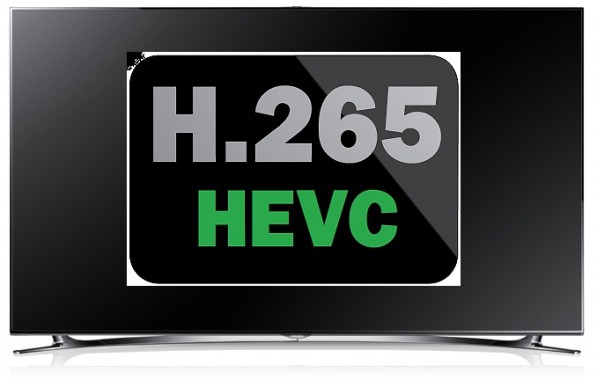 As NAB Show 2014 swiftly approaches, I’d like to talk about some of the new and exciting technologies that will be heralded.  As research continues, 8k is shaping-up into more of a reality than a dream.  We’re ALL excited about 8k video, but none so as I am!  One thing is for certain, however – in order for 8k to be viable, a new video compression will have to be developed and used in its deployment.   But don’t worry – they’re on it!  Enter HEVC.

High Efficiency Video Coding (HEVC) (the successor to MPEG and VCEG), was created in a Joint Collaborative Team on Video Coding (JCT-VC), established specifically to develop the new HEVC standard in 2010.  Now, three years later, the HEVC has been said to be able to double the data compression ratio (compared to H.264/MPEG-4 AVC) at the same level of video quality; or it can be used to provide substantially improved video quality at the same bit rate, supporting 8K UHD and up to 8192 x 4320 resolutions.

Higher video resolution and increased use of parallel processing architectures are two key issues HEVC has been designed to take advantage of.  In fact, it is meant to address all existing applications of the H.264/MPEG-4 AVC codec.

The new codec’s secret is all in the parallel processing.  Taking advantage of today’s multi-core CPU processors, the HEVC codec takes advantage of slices and tiles, as well as multi-thread encoding and decoding.  The codec comes at a computational price, though; compared to H.264/MPEG-4 AVC, HEVC is 50 – 100 percent more complex for decoding and up to 400 percent more complex when it comes to encoding.

Another secret of HEVC is how it predicts.  The HEVC prediction mode for the Coding Unit or CU (which is the sub-partitioning of a picture into rectangular regions of equal or variable size) is signaled as being intra or inter, according to whether intrapicture (spatial) prediction or interpicture (temporal) prediction is determined to be used.  The coding unit replaces the macroblock structure from previous video coding standards. 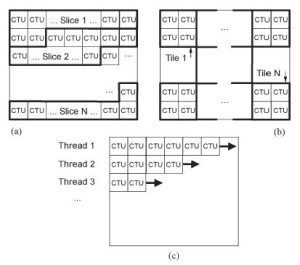 Subdivision of a picture into (a) slices and (b) tiles.

According to Per FrÃ¶jdh, Andrey Norkin and Rickard SjÃ¶berg in the April 24, 2013 edition of The Ericsson Review, “Real-time implementations of HEVC demonstrate that decoding of full HD (1080p) at 50 or 60fps is possible on fast desktop and laptop computers, running on a single core. Performance increas­es with multiple core implementations (hardware acceleration), so that a mod­ern smartphone is capable of 1080p decoding at 25 or 30fps.”

Of course, that isn’t all there is to HEVC.  While its video coding layer scheme is constructed on conventional block-based motion compensated hybrid video coding theories, and its complexity seems to draw from its advantages, using modern CPU processing technology, the decoding complexity is no more difficult (compared to H.264/MPEG-4 AVC) and the encoder intricacy is also practicable.

More on the HEVC standard can be seen in this document: www.google.com/url?sa=t&rct=j&q=&esrc=s&source=web&cd=1&sqi=2&ved=0CDcQFjAA&url=http%3A%2F%2Fiphome.hhi.de%2Fwiegand%2Fassets%2Fpdfs%2F2012_12_IEEE-HEVC-Overview.pdf&ei=Wzz0UuHFJKnYyQGK54Ew&usg=AFQjCNGEKbQ9Xf8AuhVded4ESDXE6XDUzg&bvm=bv.60983673,d.b2I&cad=rja

Recently, Telestream announced that it added High Efficiency Video Coding (HEVC) encoding capabilities to its Vantage Transcode Multiscreen product.  The Telestream implementation uses x265 encoding technology, which was developed as a joint venture by Telestream (a co-founder of the x265 project), and an open source community, creating a HEVC H.265 codec.

As time slowly moves us into the future, more and more of us expect our viewing experience become better and better.  Although it is the 21st Century and we don’t have the flying cars as predicted in the 1950’s, we don’t need to be saddled with the same low-tech television broadcasting signal from that period, either!  It’s about time TV became more watchable!  And now that we have the viewing technology in order, let’s work on the content!