Zulu
THE BEAT:
Home » News » AGITO hard at work in The Netherlands

With offices in the Netherlands, Belgium, and Spain, Eurogrip is one of Europe’s largest suppliers of specialist camera equipment and brings 25 years of experience to a whole range of productions across the continent. It was one of the first buyers of one of the AGITO modular dolly systems and has seen it come into its own for broadcast work in the current production environments necessitated by the Covid pandemic.

One of the recent key projects it has been deployed on is also one of The Netherlands’ now key winter traditions, the cultural touchstone that is Radio 2’s Top 2000. Every year, around half the country watches the end of a marathon countdown of the Top 2000 songs as voted for by the station’s listeners. The show starts on the radio on Christmas Eve and ends on New Year’s Eve with a four-hour live TV broadcast.

This year, no live audience was possible for the New Year’s Eve TV show, so instead the producers started with a five-minute promo shot in an arena filled with 500 lights representing the audience and Dutch radio DJ Bart Arens performing at a piano in the centre. Eurogrip suggested using the AGITO for filming this sequence as it could not only perform the sweeping camera moves and get close up to Arens in a Covid-safe manner but also navigate the complicated set-up without breaking anything. 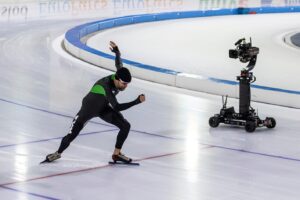 “There was only around one metre between the lights, but the AGITO was perfect for filming between them,” says AGITO operator, Jeroen De Haan. “I love its four-wheel steering, because you can go full throttle and then make rapid turns left and right and always stay sharp and on the shot.”

The AGITO has also been used extensively on another Dutch national obsession, speed skating.

“Since Covid came everyone wants to have the AGITO,” says De Haan. “For speed skating, we have a speaker mounted on the AGITO so that we can conduct Covid-safe interviews. That means we can drive up to a speed skater and ask how the race was today, so no one gets in contact with the athlete and breaks any bio-secure bubbles.”

That though is just the start of the way the AGITO is used on the large oval and its 400m track.

“We have different jobs on the speed skating,” explains De Haan. “We have an interview set, and between interviews we do some tracking race shots following the athletes. We also do wide-angle beauty shots of the venue. Beforehand we would use three cameras for that; now we just use the one and drive it rapidly between the different positions. The AGITO is like having three cameras in one.

“Because it’s so stable, you can hit a bump and you don’t see anything on the screen, especially as we’re using the Shotover gimbal. It’s just pedal to the metal and go.” 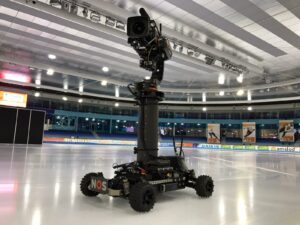 As well as quick set up, which he puts at around half an hour from opening the flight cases, again De Haan praises the unit’s four-wheel steering.

“Four-wheel steering enables really short turns,” he says. “This is invaluable in cramped positions when you can have different TV lights around you.”

Usually, the vehicle’s standard all-terrain tyres are fine for getting around the arena, as the genuine ice is confined to the two-lane track and the warm-up lane. For promo shots at the start of the season, however, Eurogrip put spikes on the AGITO and sent it out onto the ice itself.

“The spikes meant that we could go full throttle with the AGITO, even into the corners,” says De Haan. “That was awesome.”

De Haan hopes to see much more of the AGITO in the future and says, “I think this kind of camera tracking is just the beginning of something great. I love technology so let’s exploit it!”