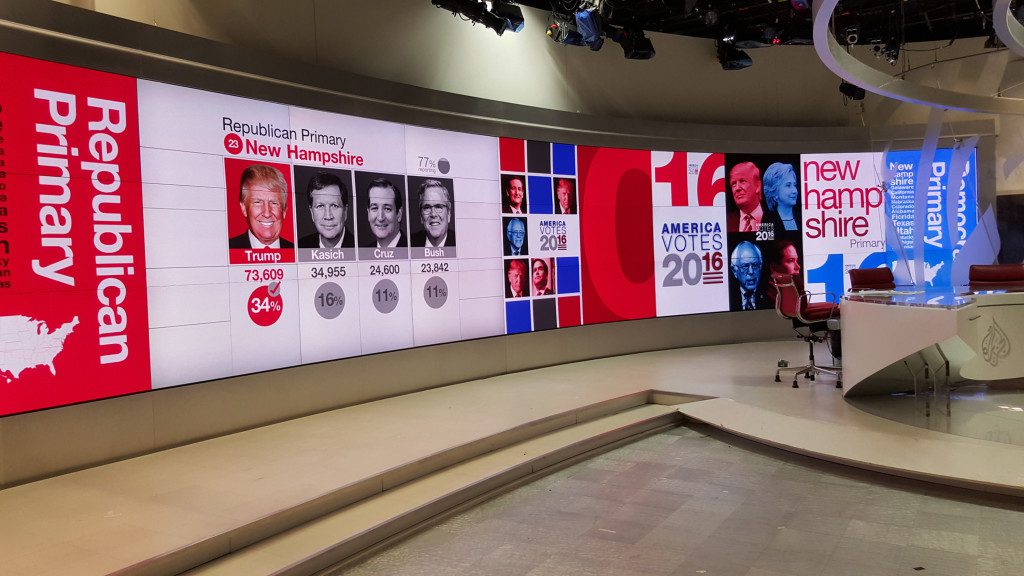 Astucemedia—a leading provider of creative and technical services and data management software for cutting edge broadcast graphics and branding—provided data integration and graphics implementation services to Al Jazeera America (AJAM) for its live coverage of the 2016 U.S. primaries and caucuses.

The network debuted this custom graphics look and data platform during its live coverage of the Iowa caucuses on February 1st, 2016, and will continue using it on future U.S. primaries, including Super Tuesday on March 1st.

“We wanted the graphics to really impress our viewers without distracting from the important data being conveyed,” Henderson said. “Astucemedia effectively struck the right balance, and their platform allows us to present these visually stunning signature graphics to our viewers.”

Since the novel effect went beyond the conventional broadcast graphics approach, the Astucemedia creative team needed to think outside the box to write complex, custom logic that would bring the animated transitions to life. They also provided custom integration that enabled the graphics to play out of a Vizrt live broadcast graphics system, and on-site technical support.

The project—which Astucemedia began in October 2015—is one of many they’ve performed for several Al Jazeera networks in recent years, including its Arabic, English, Mubasher and Balkans networks.

“I am most impressed by the way the Astucemedia team integrated with our internal design and engineering teams,” Henderson said. “Our design team presented them with a complex set of design and animation ideas, and Astucemedia was able to realize everything, and take things even further than we had hoped. Working with them has been a worry free and engaging experience.”

According to Astucemedia President Alexandre Leclerc, “We found AJAM’s unique approach to graphics integration and transitions to be very challenging, and collaborating with them has been very rewarding. We’re looking forward to providing on-site support for their live coverage of the U.S. primaries and caucuses, particularly the pivotal Super Tuesday contest on March 1st.