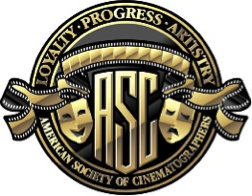 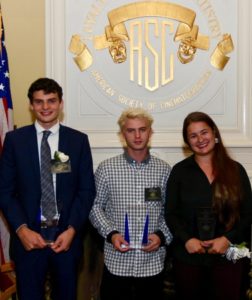 LOS ANGELES (October 16, 2017) – The American Society of Cinematographers (ASC) announced their annual Student Heritage Award winners Saturday night during a presentation at the organization’s clubhouse in Hollywood. Three student filmmakers were singled out for demonstrating exceptional abilities in cinematography. The competition is designed to highlight the work of emerging talent, and inspire the next generation of filmmakers.

Favienne Howsepian from the American Film Institute (AFI) for “Snowplow”

A panel of ASC members judged the entries, and the winners were selected from 13 nominees.

“The level of cinematography we see coming from students these days seems to get more exciting and visually challenging each year,” says ASC President Kees van Oostrum. “It’s a testament to the quality and commitment of the younger generation of cinematographers, and promises an exciting future.”

The ASC student awards are named in honor of Lesnie and Wexler, revered members of the organization. Lesnie won an Oscar® for best cinematography for The Lord of the Rings: The Fellowship of the Ring. His work on Doing Time for Patsy Cline earned an ACS Award of Distinction, as well as won the Australian Film Institute and The Australian Film Critics’ awards for best cinematography. He also won the ACS Cinematographer of the Year Award twice, for You Seng and Babe.

Wexler earned Academy Awards® for Who’s Afraid of Virginia Woolf? and Bound for Glory, and received additional nominations for One Flew Over the Cuckoo’s Nest (shared with Bill Butler, ASC), Matewan and Blaze. Wexler wrote, directed and shot Medium Cool, which is studied by film students worldwide for its cinéma vérité style. In 1992, he was honored with the ASC Lifetime Achievement Award.

The ASC Student Awards were inaugurated in 1999, with the Documentary category added in 2012. Past winners include Lisa Wiegand, ASC; Lukas Ettlin; Masanobu Takayanagi, ASC; Nelson Cragg; and Benji Bakshi, among many others who have become directors of photography or carved out careers in the filmmaking industry.