Amsterdam, AUGUST 23, 2016 – Appear TV, a leading global provider of next-generation video processing platforms for broadcast and IP television, will present its new audio processing module at IBC 2016 (Stand 1.C61). This new audio encoder enables operators to integrate all of their video and audio encoding needs into a single solution. The compact module is capable of encoding up to 32 stereo radio channels in a single 1-slot interface, making it easy to introduce large volumes of radio services to the service lineup. 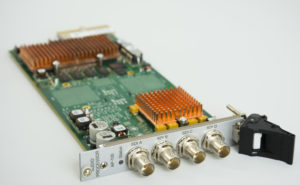 As a part of an expanding series of future software updates, the first release of this new module supports audio encoding of radio channels and manual audio leveling adjustment. The audio is received embedded in HD-SDI/SDI and supported output formats include MPEG-1 Layer 2, MPEG-1 Layer 3 (MP3), AAC-LC or HE-AAC v1/2. The module has four HD-SDI/SDI input ports. Each SDI input provides up to 8 embedded audio stereo pairs, making the total capacity 32 stereo radio channels. This audio processing module is offered in Appear TV’s modular form-factor and can be used with new or existing XC5X00 chassis, and in conjunction with any other processing modules from Appear TV’s vast range of solutions.

“We are proud to introduce this dedicated module for advanced audio processing,” says Carl Walter Holst, CEO, Appear TV. “This new high-density, modular audio encoder looks to the future of broadcast services that we seek to provide. Updates for the software are already in the works, as we look to deliver additional functionality to streamline the workflow of our worldwide customer base.”

Future updates to the software will include additional components, such as reception of uncompressed audio over IP (AES67) and transcoding of audio in incoming compressed video/radio services with automatic audio leveling. These enhancements will require software upgrades only, as Appear TV has designed the hardware for considerable feature expansion. Any new encoder/transcoder variants will be implemented as a mode change on the same hardware.

Appear TV’s modular approach enables the user to easily adopt the system to meet future operational requirements without having to completely replace the system. For those looking for a complete system, the unified head-end chassis can hold a wide range of purpose-built cards to handle reception from IP, ASI, DVB-C, ISDB-T, 8VSB, DVB-T/T2 and DVB-S/S2, descrambling, encoding/transcoding, scrambling, multiplexing and all common output formats, including IP, ASI, DVB-C, DVB-T/T2 and DVB-S/S2. The chassis can be configured and monitored using its integrated web based GUI. Additionally, the system has a completely agnostic, open architecture with interfaces that include XML, SOAP and other industry standard protocols.

Appear TV is based in Oslo, Norway, and has recently opened an additional office in Bangkok, Thailand. The company produces world-class equipment that enables operators to deliver professional broadcast services to millions of users around the globe. The company is dedicated to developing reliable, revenue-generating and innovative solutions for operators looking to deliver real-time content to the home. Appear TV head-ends are designed for modularity, high density, and flexibility. www.appeartv.com