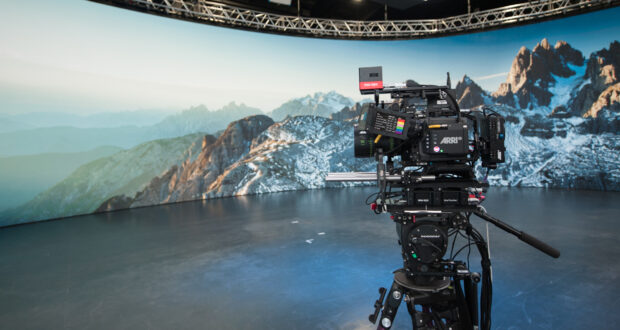 Mo-Sys™ Engineering, (www.mo-sys.com), world leader in virtual production and image robotics, has supplied the brand-new Mo-Sys VP Pro XR extended reality server as well as StarTracker camera tracking to ARRI for its new studio in Uxbridge, west of London, making them the first user of this innovative technology.

The new facility is one of the largest permanent LED volume studios in Europe and they have chosen the Mo-Sys technology, which is designed specifically for real time final pixel shooting, to deliver cinematic quality imagery, as well as precise 3D tracking for cameras, allowing directors to see the combined real and virtual images during the filming process and eliminating lengthy post-production compositing.

The new ARRI studio offers 708 square metres of floor space, bounded by 343 square metres of LED wall, including curves and a ceiling. The LEDs extend 360˚ around the studio, allowing the light from the virtual elements to fall naturally onto the real objects and actors, providing realistic soft edge lighting effects.

The facilities will also make full use of the latest VP Pro XR feature, Cinematic XR Focus, a unique and intuitive solution which allows focus pullers to pull focus between the real and virtual environments, using the same lens focussing controllers they are used to.

The LED volume was designed and installed by Creative Technology in collaboration with ARRI. Head of technical services at Creative Technology Tom Burford said, “We are thrilled to showcase this exciting new solution, bringing together best-in-class technology. This is a space designed specifically for mixed reality productions of all kinds, carefully considered to produce the most flexible shooting environment possible.”

Jannie van Wyk, Managing Director of ARRI Rental, which manages bookings for the studio, added: “Mo-Sys’ commitment to ongoing development and integration with ARRI camera systems was the reason for our decision to use the Mo-Sys StarTracker and VP Pro XR system for our mixed reality studio at Uxbridge.”

“Producers love the concept of final pixel shooting because of the creative freedom it gives directors plus the time and cost saved during post-production,” said Michael Geissler, CEO of Mo-Sys. “In the past, though, there have been concerns about image quality, shooting options, and workflow. We are solving these issues with VP Pro XR and StarTracker, in a way that fits naturally into today’s production workflows without adding complications or time penalties.

“We are delighted to have provided this ground-breaking solution, and this new ARRI studio is a world-class showcase for what can be achieved,” he added.

The UK ARRI Studio is now open for bookings.