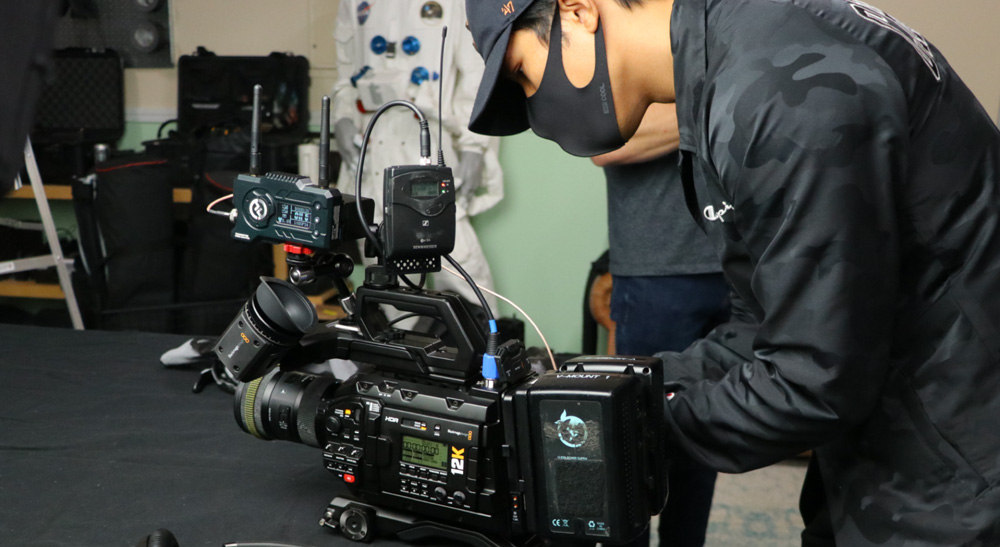 Vice President of Creative for Artlist Liran Friedman set out a goal to produce a documentary that focused on the creative freedom the platform’s creators have, and show what those same creators could achieve during a pandemic challenged 2020. The film followed four artists: two musicians from Artlist, a filmmaker for Artgrid (the platform’s stock footage portal) and a YouTube content creator, during their creative process. “We wanted to show how we can help these artists achieve freedom to create,” said Friedman, “and how we ultimately can combine all of them together into one high quality platform.”

Friendman reached out to popular YouTube filmmaker Austen Paul. “We started with Austen since he uses Artlist in a super creative way and offered him to take part in the production,” said Friedman. “He agreed, and we started playing with the idea of accompanying him as he works on one of his projects. We wanted to combine the polished style of Netflix documentaries with a more candid, fly on the wall style. It was really important for us to document a real project of Austin’s, as opposed to making one up for the purpose of the documentary.”

With Paul in place, Friedman brought aboard Los Angeles based cinematographer Corey Hour to shoot the project. “Corey came in and gave his input on the overall look, location and gear. He offered to shoot with the URSA Mini Pro 12K and showed us a few references. We immediately agreed this would be our camera. The Blackmagic 12K gives us everything we need; high quality image, a professional look and ease of use, allowing our crew to freely document any scene, without having to pause for breaks.”

Hour, an accomplished commercial and narrative cinematographer based in Los Angeles, chose to use both the 12K and the Pocket Cinema Camera 6K, the latter as B camera. “The style they wanted us to go for was a very open, organic, conversation between the creator and audience,” said Hour. “They asked us not to light or use any key sources other than the available light on location. Fortunately, the great image out of the cameras using that ambient light worked in our favor for the shots and this project.”

Even though shooting with a camera capable of 12K resolution, the new sensor meant the team could shoot at 4K without crop, and still utilize the full sensor of the camera. “We shot the entire project in 4K DCI, using Blackmagic RAW. It was comforting to know that I had such flexibility if needed, to shoot multiple frame rates, to change the resolution up to 12K if we needed it, all with the Gen 5 color science. This is really the best camera Blackmagic Design has to offer. It gave me as the DP such confidence.”

Hour focused on the documentary style, using a combination of the 12K and Pocket 6K cameras on sliders and body rigs, as well as simply handheld. “Shooting a high concept project with a limited crew presented us with many challenges. It took us nearly three hours to light, rig and stage the entire location before we could begin rolling the first take. Having cameras I was confident in, and the flexibility of Blackmagic RAW, helped relieve some of that stress.”

Shooting during the Covid 19 pandemic added its own complexity. Friedman, who is based in Israel, avoided travel by setting up a system to direct remotely. “That was a real challenge,” said Friedman. “Even though we could stream the cameras live, nothing truly replaces being physically present at a location. We had to trust Corey to deliver the look and feel we were looking for.”

Ultimately, shooting a documentary that highlights other artists can be a challenge, but Friedman was confident the Blackmagic cameras were up to the task. “Advertising to other creators means that we must maintain a very high production standard, as our audience is well aware of all the latest developments in the market. Many of our Artgrid creators use Blackmagic Design cameras already, as we do internally, so we felt confident about the images. Being creators ourselves is definitely an advantage since we understand creators’ needs and challenges. Artlist’s primary goal and value proposition is to provide creators with creative freedom. That’s what guides us in every production we work on. And in the end, the final product looks every bit as great as we expected.”