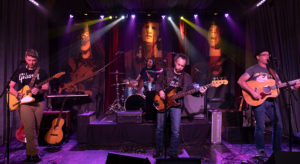 Now in its third season, Austin Music Live features a different local music act, including the likes of Texas legend Carolyn Wonderland, and a different venue in each episode. Each performance is captured live and broadcasted via digital platforms such as XUMO, an OTT VOD provider that reaches consumers directly through smart TVs, in addition to YouTube, Facebook Live, Twitter and the Austin Music Live official website. Each live broadcast receives 1,500 to 3,000 views, while VOD content for the series receives 1.5 million views annually on XUMO.

To capture each show, the team brings a mobile production trailer to the selected venue and runs cables to all camera positions within. Each of the five cameras is equipped with a Video Assist 4K, affording camera operators a clear view of what they are shooting while also allowing them to ISO record on each camera. Everything captured by the cameras is relayed back to the production trailer where the ATEM Television Studio Pro 4K is stationed. From the production trailer, Calder creates a compelling viewing experience using the ATEM Television Studio Pro 4K.

“With the ATEM Television Studio Pro 4K, there’s no delay in the stream when switching cameras, which is really critical for pulling off a polished live streaming event. In addition, its multi format input, with re sync and low latency conversion on each input, is incredibly convenient because it allows me to integrate any type of camera in the production with ease. Its media pool can also hold up to 20 small videos for mixed effects and overlays. You used to need a separate computer for that, so it’s a huge plus that cuts down on the amount of equipment we need to bring out with us,” said Calder.

Since Austin Music Live is a mobile production, the team needs a solution that’s both cost effective and portable. “We’re working with limited staff and limited budget, so I’m juggling five different jobs that we’d ordinarily have five different people for,” Calder added. “We need a switcher that has enough fire power to control all our cameras while still being small enough to fit into our mobile production trailer. The ATEM Television Studio Pro 4K lets me communicate with our camera operators via built in talkback and quickly switch from the five different cameras to get the angles we want. This lets us control how we want remote viewers to experience the performances; we want them to feel like they’re right there alongside the live audience.”

“Due to latency requirements, we currently broadcast live and record in 720/1080p, but the ATEM Television Studio Pro 4K’s 12G-SDI and 4K capabilities give us the option to make the switch when it makes sense for us in the future. Knowing that we won’t have to invest in additional equipment brings us peace of mind from a budget standpoint,” Calder said.

“Austin Music Live is our way of helping preserve the local music scene here in Austin. We want everyone, regardless of geographic location, to be able to experience its thriving and robust music scene. With the implementation of the ATEM Television Studio Pro 4K, we’ve achieved a world class, yet intuitive production workflow at a price point that works for us. For me, it’s just a very user friendly, easy to use product; we plan to purchase another unit in the near future,” Calder concluded.

Zodiac Studios plans on using the ATEM Television Studio Pro 4K along with two of Blackmagic Design’s URSA Broadcast cameras on live productions for the Austin Spurs’ 2018/2019 season as their official broadcast partner. The URSA Broadcast was selected for its superior image quality, B4 broadcast mount and small physical footprint.