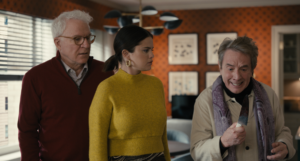 “Only Murders in the Building” is a Hulu Original series, produced by 20th Television, a part of Disney Television Studios, that follows true crime podcasters that find themselves and their building at the center of a crime. In its second season, the show stars Steve Martin, Martin Short and Selena Gomez as neighbors in the swanky New York City apartment building the Arconia, who are now being accused themselves of a murder.

The team, led by Atlanta VFX Owner and VFX Supervisor Jason Maynard and Compositing Supervisor Jeremy Nelson, completed extensive greenscreen work throughout the season. “Between Fusion Studio’s Delta keyer, Ultra keyer and Primatte keyer, there’s always a keyer that will get the job done and make it seamlessly integrated,” said Maynard. “For example, in one episode we had more than 60 greenscreen shots in just the apartment building. For that episode, some of the actors were wearing shirts with green hues, so we had to use multiple keyers to properly isolate the colors.

“With the actors framed against a greenscreen that needed to be replaced with interior window shots, we used the Delta keyer as the main key, and then the Primatte keyer and Ultra keyer to complete the shot. With all the window reflections and smudges, it was more complex than just setting up a key and rendering the scene. Since one of the actors’ shirts included multiple shades of green, the Primatte keyer was crucial as its additive nature in selecting what it’s keying made it a perfect solution to finish the job.”

“For another episode, we had a tricky shot where Mabel (Gomez) has a flashback to her childhood, and they wanted to blend two camera pan takes into one take,” added Nelson. “Using Fusion Studio, we did 3D stabilization for the A plate and then projected the image onto the B plate for a seamless transition between the two takes.”

Fusion Studio’s 3D tracker was used to get rid of unwanted boom mics, crew, and camera reflections in windows. Additionally, Maynard noted its node based workflow made complex scenes easier to manage, so they could move quicker throughout the various VFX sequences.

“It’s often the small details that matter when putting together a show like this. For example, we used Fusion Studio’s 3D displacement tools to swap out a letter on the entrance to the apartment building gate,” Nelson explained. “It needed a quick 3D track for the camera move, and a clean plate using the paint node. It was a fast replacement with the displacement tool, which is great for easy 3D modeling with alpha channels or roto shapes.”

Product photos of Fusion Studio and all other Blackmagic Design products are available at www.blackmagicdesign.com/media/images