Atomos is very pleased to announce the appointment of its Chief Product Officer, Estelle McGechie, to the position of Chief Executive Officer, effective immediately.
Estelle has a long history of working with the team at Atomos, since the first Atomos Ninja, the launch of Apple ProRes RAW, and the introduction of Timecode Systems for acquisition. During her time at Atomos Estelle has leveraged her international product development and marketing expertise to evolve the Company’s approach to software and services platforms, a key strategic pillar for Atomos. Estelle’s elevation to CEO will enhance Atomos’ ability to deliver on its growth strategy by expanding further into new verticals with both hardware and software products.

Australian-born, Estelle will return to Melbourne with her family after a successful career in the United States with roles at some of the most prestigious media, entertainment, and product companies in the world such as The Walt Disney Company, Apple, and Logitech. During her time at Apple Estelle oversaw worldwide product development and marketing of professional video applications such as Final Cut Pro, Motion, and Compressor, in addition to further developing Apple technologies of ProRes and ProRes RAW, XML, FxPlug, and Workflow Extensions. Most recently Estelle was Vice President of Marketing at Frame.io, the cloud-based video collaboration platform, which was acquired by Adobe in August 2021. 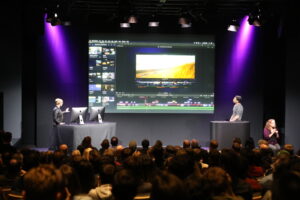 Estelle has developed world-class software and services and managed multiple products as well as hardware and software teams around the world. Estelle has worked with major broadcasters such as ABC, NBC and CNN, with film companies such as Sony and FOX Studios, as well as many popular YouTubers.

Chris Tait, Atomos’ Executive Chair said: “After Estelle’s appointment as Chief Product Officer in June this year she quickly demonstrated to the board and her peers the ability to deliver on our strategy. Her signature collaborative style and rigorous approach to developing and bringing video technology products and services to market is a great fit for Atomos at this important stage of our strategic roadmap. We are thrilled she has taken on the CEO role and welcome her back home to Australia.”

Deputy Chair, Stephen Stanley said: “Echoing Chris’ comments, we are delighted that Estelle will be driving our future strategy as her skills align strongly with a fast-paced global video technology company such as ours.  In line with Estelle’s appointment, Chris Tait will revert to the role of Non-Executive Chair. We would like to thank Chris sincerely for his additional efforts over the past 18 months after taking on increased responsibility during the height of the COVID crisis.”

Estelle McGechie commented: “I’m excited to take the helm at Atomos to help drive the Company to new heights and further deliver on our vision. Our founder, Jeromy Young built Atomos into a global business with exceptional world-first video technology products and services. It’s an honor to lead this extraordinary organization alongside our dedicated employees, the executive team, the Board, and a community of customers who are so deeply committed to their craft. I look forward to bringing everything I’ve learned from my international career home to Australia to continue our positive momentum.” 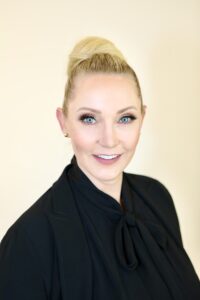