After more than two years, the work of Rich Chernock is finally coming to fruition.  Dr. Chernock 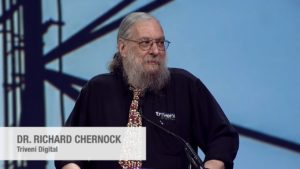 , chief science officer of Triveni Digital, holds an Sc.D. degree in nuclear materials from MIT and is one of the principal developers of the ATSC 3.0 standard.  But his work is still underway, as the standard continues to be developed.

Representing a major milestone for ATSC 3.0, final approval of the A/322 Physical Layer standard shows the drive behind next-gen TV.  In all, there are about 20 different standards that will be included as part of the ATSC 3.0 body, including protocols for video and audio compression, high dynamic range (HDR), wide color gamut and immersive sound, closed captioning, advanced emergency alerting, security, companion devices, personalization, applications & interactivity, watermarking & fingerprinting, and  Internet Protocol delivery.

“Flexibility in service options is a keystone of the next-generation ATSC 3.0 DTV broadcast system,” states Dr. Chernock, “including the opportunity for terrestrial broadcasters to send hybrid content services to fixed and mobile receivers seamlessly—combining both over-the-air transmission and broadband delivery. Options such as “multiview” and “multiscreen” are also important, as is the option 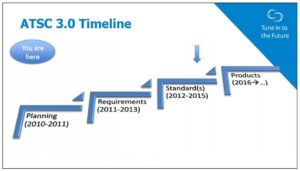 of choosing among standard definition, HD and Ultra HD resolutions.”

Most importantly, however, The Physical Layer transmission system for ATSC 3.0 has now been approved by the ATSC member politic and work can now progress on the balance of the standards, which allows “television broadcasters to choose from a wide variety of transmission parameters so that each station can tailor its signal to best serve its local market by providing the combination of services and coverage area best suited for the market and its terrain.”

“The hundreds of technology experts from around the world who have contributed their time and expertise to this process have selected the best and most flexible transmission system as the foundation of ATSC 3.0. While other ingredients of the ATSC 3.0 standard are still in the final stages of standardization, the approval of the over-the-air transmission system is a foundation for the future,” 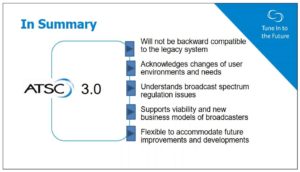 According to the ATSC website, “[k]ey capabilities of the ATSC 3.0 Physical Layer include use of Single Frequency Networks, multiple physical layer pipes, and channel bonding.  Selected technologies allow for data transmission with a wide range of guard intervals, forward error correction code lengths and code rates.”

A PDF copy of the standard can be downloaded at: atsc.org/standards/atsc-3-0-standards/

The Advanced Television Systems Committee is an international, non-profit organization developing voluntary standards for digital television. Over 150 ATSC member organizations represent the broadcast, broadcast equipment, motion picture, consumer electronics, computer, cable, satellite and semiconductor industries.  Participation in ATSC is open to all with a direct and material interest in the work. Organizations interested in joining ATSC will find more information on the ATSC web site www.ATSC.org