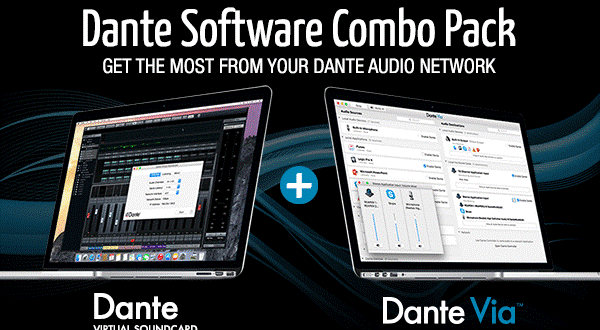 Audinate Announces Dante Via and Dante Virtual Soundcard Bundle for $59.95

PORTLAND, OR — October 27, 2016 — Audinate®, creator of the industry-leading audio networking technology Dante™, announces the immediate worldwide availability of the Dante Software “Combo Pack”, combining licenses for Dante Via and Dante Virtual Soundcard for only $59.95. This bundle represents a 25% savings over purchasing the software separately. The Dante Software Combo Pack provides the ultimate in computer-based audio flexibility and creativity, including:

• Record up to 64 channels of audio using your favorite tools with Dante Virtual Soundcard
• Share audio from applications and USB devices with Dante Via
• Create computer-only audio networks, or connect to any Dante system 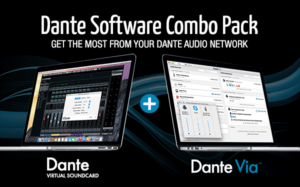 Dante Virtual Soundcard turns your computer into a high performance Dante-powered recording workstation. Users can instantly connect to record, process and play out up to 64×64 channels using any audio application and any combination of Dante-enabled devices and software. Like Dante Via, Dante Virtual Soundcard uses the Ethernet port you already have — no snakes, no converters, no special cables or connectors.

To learn more and to purchase the Dante Software Combo Pack, visit www.audinate.com/combopack

About Audinate
Audinate was founded with a vision to revolutionize professional and commercial audio for the 21st century. Audinate’s award-winning Dante audio-over-IP networking solution is the worldwide leader and is used extensively in the professional live sound, commercial installation, broadcast, public address, and recording industries. Dante replaces traditional analogue audio cables by transmitting perfectly synchronized audio signals across large distances, to multiple locations at once, using nothing more than an Ethernet cable. Audinate is headquartered in Australia and has regional offices in the United States, United Kingdom and Hong Kong. Dante technology powers products available from hundreds of leading audio partners around the world.