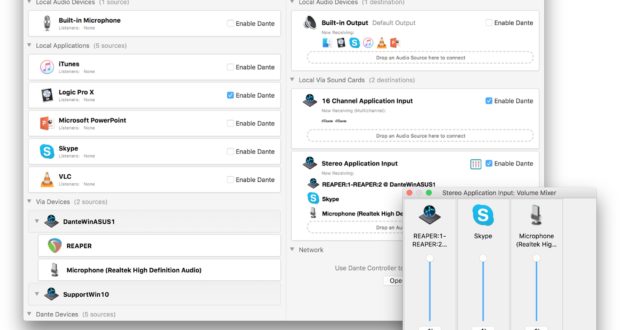 Audinate Updates Dante Via with Multichannel and ASIO Support

PORTLAND, OR — September 21, 2016: Audinate®, creator of the industry-leading audio networking technology Dante™, has announced the immediate worldwide availability of Dante Via™ version 1.1, a major update to the popular audio networking software. New features of this update include:

Multichannel application support – up to 16×16 channels per application
Support for high performance ASIO device drivers on Windows PCs
Source mixes with individual level controls for stereo destinations
Ability to append channels when adding sources to multichannel destinations
Device Lock, which prevents unwanted changes to Dante Via 1.1 from other network users 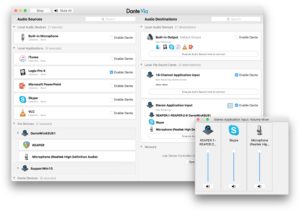 With increased performance and channel count, Dante Via 1.1 supports up to 16×16 channels of audio for each application and up to 32×32 for each connected device. Composers, performers and recording engineers can now make audio connections between multiple applications and devices within one computer, or between multiple computers using Dante audio networking. By extending existing, cost-effective computer-based I/O over a Dante network, systems for overflow rooms in schools, business and houses of worship are easily created and deployed as needed, with only a few mouse clicks.

Additional features include Device Lock, which prevents unwanted changes to Dante Via from other computers on the network, and a new Mixer panel that enables level adjustments of multiple sources that are combined at stereo destinations. The new Append Channels feature automatically assigns sources to available channels when connecting to multichannel destinations, allowing for quick and logical routing to DAWs and mixers.

“Dante Via has already changed the way that integrators, sound engineers and consumers use computer-based audio devices and programs.” says Joshua Rush, VP of Marketing & Product for Audinate. “With support for multichannel audio applications and ASIO devices, the latest version unlocks a host of new possibilities for computer-based audio.”

Dante Via has already secured several high-profile awards, including several “Best of Show” accolades at InfoComm 2015 and 2016. The software runs on PCs running Windows® 7, 8.1 or 10, and Macs® running OS X10.9.5 or higher. It supports up to 48 source and 48 destination channels, and 16 channel I/O for as many as 4 simultaneous applications.

Dante Via 1.1 is a free upgrade for existing users of Dante Via, who may obtain the new version by clicking “Check for Update” in the Dante Via is priced at $49.95 USD, and a 30-day free trial is available at www.audinate.com/dantevia.

About Audinate
Audinate was founded with a vision to revolutionize professional and commercial audio for the 21st century. Audinate’s award-winning Dante audio-over-IP networking solution is the worldwide leader and is used extensively in the professional live sound, commercial installation, broadcast, public address, and recording industries. Dante replaces traditional analogue audio cables by transmitting perfectly synchronized audio signals across large distances, to multiple locations at once, using nothing more than an Ethernet cable. Audinate is headquartered in Australia and has regional offices in the United States, United Kingdom and Hong Kong. Dante technology powers products available from hundreds of leading audio partners around the world.