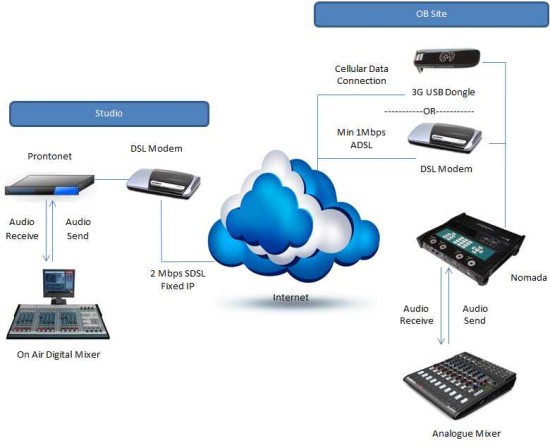 Audio is HEAR to stay!

Let’s face it – broadcasting started out with audio.  Long before there was “radio with pictures” (better known to all of us as “television”), there was simply radio.  Radio is where it all began – and where the advent of “audio engineers” appeared.  It was the audio engineer’s main purpose to ensure that the sound generating outside the microphone made it into the series of vacuum-tubed components, through the airwaves, and into receivers (creating the first “deliverable”).  We’ve come a long way since then, and the audio technology just keeps getting better and better.  But what else is there?

PLENTY!  Since 1948, the Audio Engineering Society (AES) that started in the United States today has become an international organization that unites audio engineers, creative artists, scientists and students worldwide.   Its 14,000 members are affiliated with more than 75 AES professional sections and more than 95 AES student sections around the globe, as they promote advances in audio and propagate new knowledge and research about the field.  Section events and activities allow for the opportunity of professional networking and personal growth via guest speakers, technical tours, demonstrations and social functions – not to mention their conventions, which you can see here: www.aes.org/events/135/.   Their website: www.aes.org.

Did you know that the AES is constantly involved in the establishment and upkeep of international standards in the areas of digital and analog audio engineering, communications technology, acoustics, media preservation and creative practice?  You can find out more here: www.aes.org/standards/.  There are many companies involved in such high-end audio.

One highly-familiar company in the sound industry is Solid State logic (SSL).  Founded in 1969, SSL is the premiere audio technology company, equipping over 3000 studios worldwide with professional-grade sound processing controls and technology.  Inventing, designing and manufacturing technology for the creative manipulation of sound, users and industry experts around the globe visit SSL’s Oxford, England 15-acre science park headquarters to consult with SSL audio experts and see all the latest and greatest SSL equipment.

According to its website, regional offices in Los Angeles, Milan, New York, Paris and Tokyo, along with additional support provided by an international network of highly qualified distributors, ensures that “powerful and innovative proprietary technology is used to create dedicated solutions for the recording and manipulation of sound in highly demanding environments.”  SSL the world’s leading manufacturer of analog and digital audio consoles and provider of creative tools for film, audio, video and broadcast professionals.  See more at: www.solid-state-logic.com.

Streaming audio over IP (AoIP) networks (also known as audio contribution over IP (ACIP)) are popping-up all across the Cloud; but ISDN (Integrated Service over Digital Network) is not going the way of telegraph lines just yet, nor have they been replaced by wireless IP (i.e. 3G and Wi-Fi), despite the spreading wireless technology.  Audio over IP is used for large sporting events, scientific applications, even municipal transit authorities, such as the New Jersey Transit Corporation, which broadcasts messages to their consumers using Audio over IP Equipment.

Audio over IP has other applications, as well.  For example, in post and inside broadcast facilities, AoIP is used to transport audio within facilities – a potentially more cost-effective method than other traditional means. But does that come at a price because of compression?

It doesn’t have to, according to Axia – the studio audio division of Telos Systems, one of the world’s leading providers of ISDN, coded audio and telephone interface products, which specializes in digital audio routing, mixing and distribution systems for broadcast and other pro-audio applications.  Foundational technology in all Axia products is a patent-pending protocol called “Livewire,” that enables high-reliability, low-delay uncompressed digital audio over Ethernet.

Axia equipment can satisfy even the largest studio needs with its Catalyst 6500 Series, which  currently supports up to 1152 10/100-Mbps, 576 10/100/1000-Mbps, or 64 10-Gbps Ethernet ports in a single chassis, with system scalability up to 720 Gbps, providing 40 Gbps/slot (half-duplex).  So many options and configurations are available!  You can peruse them (and even contact their engineers to fulfill your needs) at their website: axiaaudio.com.

But if wireless AoIP is what you’re after, you will have compression considerations.  At Media Prima Radio Networks in Petaling Jaya, Malaysia, uses a Nomada that connects back to a rackmounted Prodys Prontonet codec at the studio, which has a dedicated DSL broadband connection with a static IP address.

So don’t give-up on audio yet!  Audio is still a very important consideration today – after all, what’s YouTube without sound?  And what would any content delivered to your iPod, iPad, iPhone or the myriad of other devices be without audio accompaniment?  Unless you want to go back to the days of silent film, pay attention to the changing technology of audio media!  And remember to stay blogged-in!