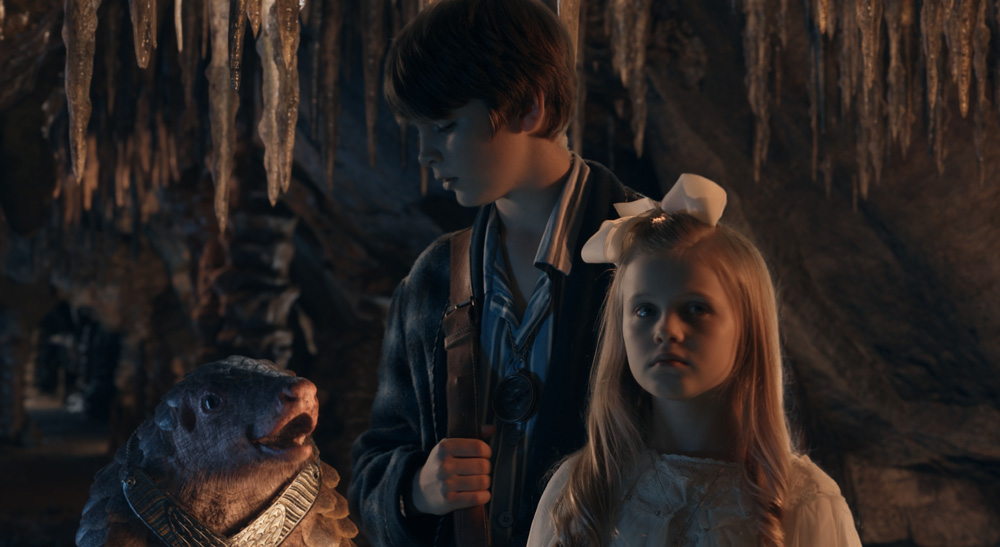 “Don’t Go Below” tells the story of 12 year old Peter and his sister Verity, who are whisked off to the underground kingdom of the pangolins where a prophecy has declared that Peter is the king and he must go on a quest to save the realm from the mysterious Shroud.

In creating the film, Drummond replicated a real time ray tracing system by using ultra short throw projectors and ambient light rejecting screens. With the system, the first of its kind globally, he was able to dramatically improve VFX realism by copying the way light reflects and refracts in the real world. To control the light spill for the system, he used Pocket Cinema Cameras to shoot at a higher ISO, which allowed him to reduce light output and still get beautiful shots. The real time projection system gave the lead actors (aged 9 and 12) more direction for interacting with other characters within the fantasy world of the film.

Despite a tiny crew of just seven people and a small budget, the Pocket Cinema Cameras allowed Drummond to utilize a real time projection system for his filming. Blackmagic Design hardware and software meant he was able to execute a delicate dance of foreground lighting, real time CGI, high ISO and some innovative use of DaVinci Resolve Studio to pull off the shots.

Drummond, who has worked in VFX for over 25 years, was also able to cut more than 300 days in post production for the film. “Using DaVinci Resolve as the hub for everything has meant we’ve had a fantastic workflow and overall experience. The latest update for DaVinci Resolve has also been a godsend,” he said.

“Resolve was used as the central edit system and allowed editor Joseph Morris to cut each scene in its own timeline so we could cut the workload into manageable chunks. This gave us a lot of flexibility. Each of the scenes was then assembled into a master timeline for the full feature. The film has around 1600+ VFX shots involving full CGI characters and environments so organization on a per scene basis was crucial,” Drummond said.

Using Fusion Studio, Drummond was able to create a master compositing macro that handled all manner of procedural compositing such as auto keying, fake image based lighting, plate relighting and standard integrations including defringing, light wraps, fogging, etc. “The integration of the VFX rendered in Unreal Engine was very simple, and the ability to effortlessly composite shots in full 32 bit float at 6K was far and above what my previous workflow could handle,” Drummond added.

Sound design was able to be done on a per scene basis rather than reverting to the old paradigm of reels. “This meant that we could do dialogue edit and track lay right in the editor without fear of reconform nightmares down the track,” Drummond said. “Color grading has always been DaVinci’s forte, and so it goes without saying this process was very easy, but the ACES 1.3 integration with Dolby Vision made the process of creating HDR and SDR deliverables very easy.”

“Being able to use this real time projection system had major benefits for the film. It helped inform my decisions on set and helped my young cast imagine where they were. The interplay of the camera and the projection gave the CGI a really organic feel which looks great,” he said.

“The Pocket Cinema Camera 6K is absolutely incredible. The latitude is amazing. The size and weight of the cameras also meant my crew and I were able to be extremely agile. This was important as I had a compressed time frame and a tiny crew,” Drummund continued.

“Being an independent film company, it’s crucial that you can use your investment on the screen and don’t spend tons of money on aspects that don’t have a key impact on the end product. When I’m reaching for the stars, I don’t want anything to weigh me down. The Blackmagic Design Pocket 6K and DaVinci Resolve Studio have given me the end to end solution I need. They’ve removed the round trip and left only the journey,” he finished.

“Don’t Go Below” will be released globally in January 2023.