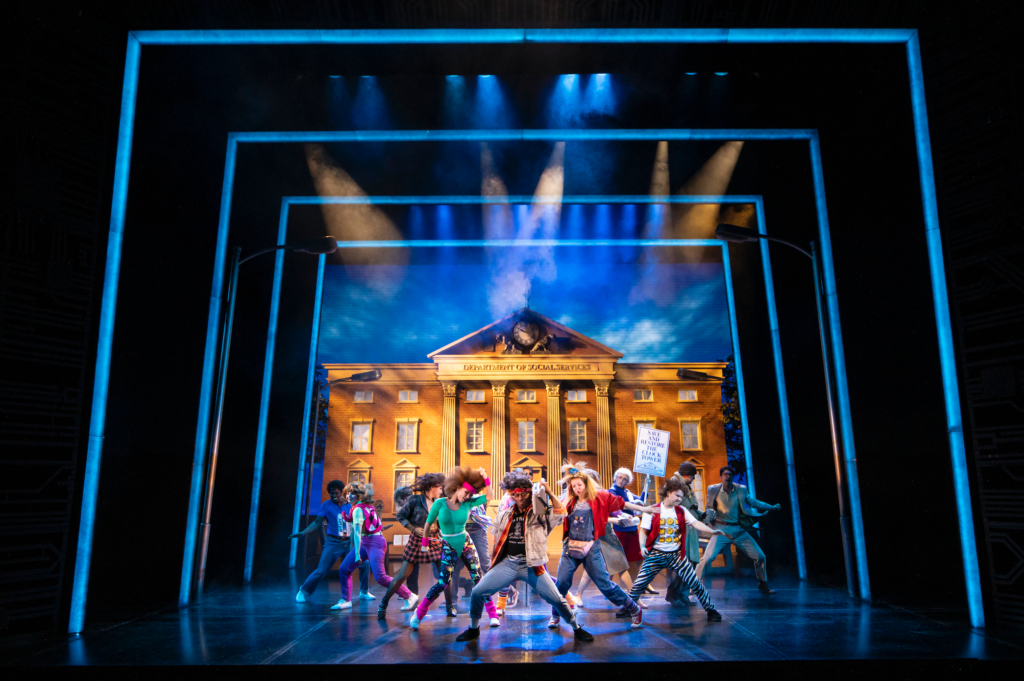 When pop culture movie phenomenon ‘Back to the Future’ arrived in the West End, it was a time-traveling dream come true for the many fans of the original movie. Following its world premiere at the Opera House in Manchester in February 2020, the VFX-filled show set up its residency at London’s Adelphi Theatre in August 2021, with three disguise gx 2 media servers powering extensive Notch LC Video files and Notch generative video content.

FRAY Studio co-founders Finn Ross and Adam Young, created the show’s video elements. “The video design had two main roles in the show,” says Ross. “We exploded the ordinary world of the show into big and fantastical worlds inspired by the science fiction of both 1985 and 1955 when Doc broke into moments of creative inspiration. Then, when Marty got into the car, we moved the world along with the DeLorean (the time-travelling car in the show). Video was a massive part of the show delivered through a large 3.9mm ROE Visual Diamond LED wall upstage, with Brompton Technology LED processors, and projections onto a gauze downstage, which allowed us to wrap the action in the video.”

Jon Lyle of Ammonite, who did the show’s system design, explains that ‘Back to the Future’ had a design requiring traditional playback and live-generated content. “With a long-standing partnership, and the show’s specific requirements, disguise was the obvious choice for us.”

“With disguise, the advantage of the product was as much about the support as the actual product,” Lyle continues. “We could start the musical confident that the server would respond and develop to our needs.”

Lyle notes that the team began modeling and visualising the complex time-change sequences in the disguise software, to bring automation and video together long before the installation. “The project required the ingestion of sound, lighting and automation data, all of which was handled seamlessly.”

FRAY Studio made extensive use of pre-visualisation within disguise to develop the moving car sequences. “It provided an excellent way to share ideas for how video and scenery could work together,” Ross explains.

Freelance Programmer Emily Malone, who programmed the original production in Manchester, says, “‘Back to the Future’ was a technically busy and complex show for all departments. Having a short time in the venue to get the show ready meant that the ability to visualise and program offline became more important than ever. Being able to immerse yourself completely within an accurate 3D representation of the set as you’re sequencing is invaluable, and something we really couldn’t do without.”

During the show, video was triggered by both time code from sound and cue triggers from lighting, as well as tracking data from the automation system. According to Malone, “disguise is brilliant at communicating with external systems, and getting these triggering and tracking systems set up – it couldn’t have been more intuitive.

“Integrations with external systems weren’t only part of our show running workflow, but also our creative process,” she notes. “Video and lighting shared control of the giant auditorium circuit boards – merging the control of them in disguise. This allowed both departments to immediately try out new looks and ideas during rehearsals and, at points, collaborate to create looks that were a composite of control from both lighting and video.”

For FRAY, synching video with Marty’s DeLorean “was a challenge,” says Ross. “We made use of things like device recording to get an accurate picture of what automation was doing and to gather data we could use to shape animation.”

FRAY also made extensive use of the Notch LC codec. The team had a very high-resolution LED wall and a lot of content with chromic metal objects moving around within multicolor environments. The codec allowed them to get astounding gradients quite unlike anything they have ever been able to achieve before.