CULVER CITY, Calif.—In a project spanning 9 months, BARABOOM! Studios served as previsualization supplier for Cosmos: A SpaceTime Odyssey, assisting in the design and execution of numerous complex visuals for the groundbreaking National Geographic Channel series, which recently won 4 Emmy Awards. The Los Angeles-based studio contributed to all 13 episodes of the series’ first season, as the hub of a virtual production model, creating previsualizations used in planning visual effects, set design, stage and locations shoots, and post production processes. BARABOOM! Studios is one of the industry’s leading specialists in previsualization, a service that is gaining increasing use throughout the production cycle to save time and money, and improve creative options. 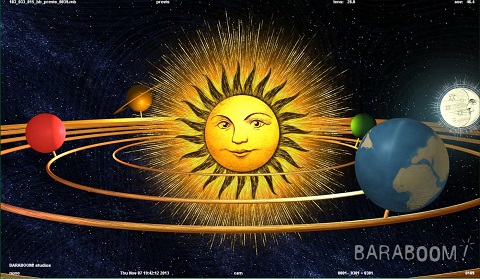 BARABOOM! Studios’ previsualizations were used in planning more than two dozen shots for the show’s final episode where host Neil deGrasse Tyson pays a virtual visit to the ancient city of Alexandria, Egypt.

BARABOOM! used preliminary Sketch-up files provided by production designer Seth Reed and art director John B. Josselyn to produce 3D models of the city’s legendary library. These models meshed with the live action set and served as a planning tool for visual effects; a process known as post-vis. 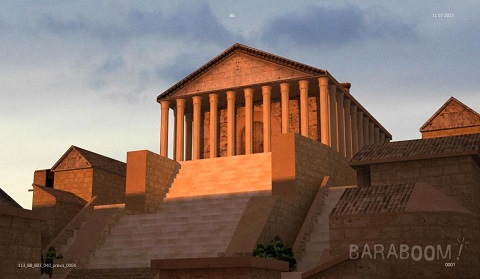 “The models allowed the production designer and visual effects supervisor Rainer Gambos to experiment with their designs and make changes on the fly,” explains BARABOOM! Studios creative director Pepe Valencia. “They could add more columns, enlarge the library and otherwise modify the space.”  In addition, Baraboom! built models of the city itself and mapped out complex camera movements with Gambos, to be utilized by the visual effects vendor for final renders.

BARABOOM! also previsualized more than a dozen shots for the show’s fourth episode A Sky Full of Ghosts. The shots were part of a segment about gravity and showed what would happen to a New York City street if gravity were reduced to zero or raised to 8 or 9g, or 100,000g. At zero g, for example, people and objects would fly off into space; at 100,000g, a fire hydrant would be crushed by its own weight. 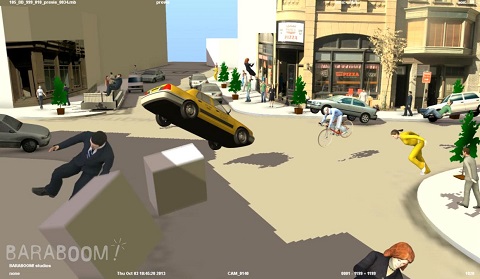 For that sequence, BARABOOM! was given a Sketch-Up file of the sound stages at Paramount Studios in Hollywood, where live action elements were to be shot.  Previs was used to plot camera and crane positions, camera movement and lighting (position of the sun and shadows), and also to determine which elements could be shot practically and which should be produced as CG.

Similarly, BARABOOM! produced a virtual replica of a New York street where backgrounds were shot. “We were able to illuminate many aspects of the production before crews arrived on the set,” observes Valencia. “We were able to indicate sunlight, and show what the lighting conditions  would be depending on if they were shooing in the morning or in the afternoon. If it was going to be shady, they knew they’d have to shoot from a different direction.”

“To move a crew around takes a lot of time, so if you can figure things like that out ahead of time, it saves crew hours,” adds executive producer Mike Pryor.

“Production knows how many extras they are going to need, and how many cars,” Valencia says. “We give them a lot of information.”

In a task involving Tech-viz, the BARABOOM! team produced high resolution (42K) 3-dimensional star maps, representing the night sky from both the northern and southern hemispheres. The maps were based on data supplied by National Center for Supercomputing Applications (NCSA)  detailing the positions and movements of more than 300,000 stars, and were verified for accuracy by Cosmos’s scientific advisors. BARABOOM! provided the maps to the show’s production team and to visual effects vendors to ensure that representations of stars were accurate and consistent throughout the show. 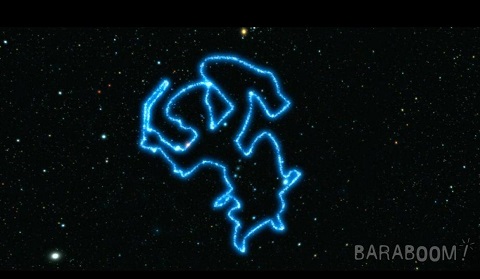 “Since everything is digital, we speak the same language as every department of production,” Valencia explains, referring to a recent presentation he gave on Virtual Production at the film conference FMX in Stuttgart Germany. “Film and television production used to be a linear process, but today it’s more circular. As the production designer is building the set, the visual effects team is already adding to it. Previsualization is a tool that can help different departments communicate better and work together more effectively. Cosmos is a perfect example of this tool in action.” 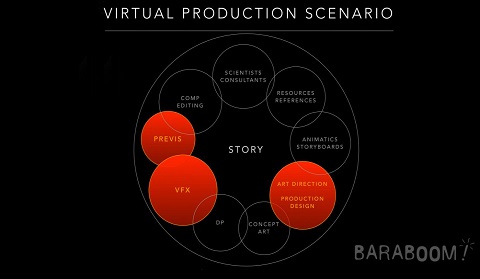 Based in Los Angeles,  BARABOOM! Studios works locally, on location or virtually, depending on the needs of the individual production.