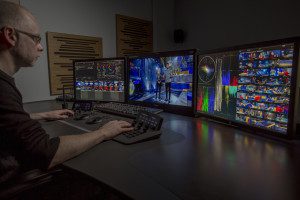 08 April 2016: Belfast production and post-production facility Ka-boom has installed a Baselight ONE grading suite with Slate control panel to add to its existing Baselight for Avid plugins. Initial grading projects for movies and documentaries led to Ka-boom winning the finish on a major new BBC entertainment show, Can’t Touch This, which called for all the efficiencies as well as the creative power of Baselight and its interaction with Baselight for Avid.

Ka-boom was founded in 2010, initially as an audio post company but quickly adding Avid video editing. Recognising that advanced colour grading was an increasingly vital part of post, the company added Baselight Editions to its editing suites early in 2015. Baselight for Avid inserts the full Baselight grading toolset into the Avid environment, allowing the editor to take more creative colour control as well as open up the possibility of a fluid and flexible exchange of grades between editors and colourists.

This addition proved so successful that Ka-boom soon decided to invest in a full grading suite, and Baselight was the obvious choice. “We felt FilmLight came with the reputation of being THE colour system and it was also familiar to our colourist so he could instantly start working,” said Zach Willis, co-founder of Ka-boom. “Baselight gave us the gold-plated solution for a prestigious project like Can’t Touch This.

“The show is original format programming from newbie Northern Irish production company, Stellify Media,” added Willis. “It is a big, exciting Saturday night entertainment series, and the game show’s course is the biggest set the BBC has ever built. They wanted to keep the work over here and as our services now include state-of-the-art editing, sound design and colour grading, we won the contract to post the series right here in Belfast.”

The 10 episodes were shot as an outside broadcast in August 2015, with 12 cameras plus multiple GoPros and three super slow motion cameras. “Each day of shooting we would receive around four terabytes of rushes,” Willis recalled.

The 10-part series therefore used three Avid edit suites, all networked with the Baselight finishing room. When the pictures were locked Ka-boom’s senior colourist, Jim Agnew, started work, but all colour decisions were captured as metadata and superimposed on the raw camera content in real time. Because Ka-boom also uses Baselight Editions for Avid, producers making the final review in the editing suite could tweak colours without round-tripping into the grading-suite again, a huge boost in productivity.

“This is one of the big pluses for Baselight versus anything else,” commented Willis. “You never need to round trip or have the colourist break off from what he is doing. The colourist can be grading away in the Baselight suite and the editor reviewing in online, tweaking in Baselight Editions. With the full Baselight ONE system alongside Baselight Editions and the render-free workflow, all barriers are lifted.”

“And it’s not escaped our clients’ notice either,” he added. “Prior to Can’t Touch This we graded a number of documentaries in Baselight, for BBC Scotland, Al Jazeera and the RTS award winning Channel 4 series Dispatches episode, Kids in Crisis. We also posted a couple of short films, which gave us the opportunity to work in higher resolutions, and to output 2K DCPs direct from the Baselight, which worked seamlessly. No matter what project we’ve worked on, we – and our clients – have been more than happy with the results.”

The new grading suite, along with additional edit suites, were built to a Ka-boom design by Tyrell, one of FilmLight’s distribution and integration partners.

The first episode of Can’t Touch This aired on BBC One on Saturday 26 March.