BirdDog, an Australian company founded in 2016, is relatively new to television broadcasting. It’s based on a new technology and a single concept: simplify global television production through the use of computer networks.

The key technology behind BirdDog is NDI (Network Device Interface), a royalty-free software specification developed by NewTek to enable devices to communicate, deliver and receive HD and 4K video. It is frame accurate, low-latency and suitable for switching in a live television production environment.

Dan Miall, CEO of BirdDog, previously worked in post-production for Avid. When NDI came along, Miall made a bet that the new technology would transform video production. The idea caught on with a bang — with the company earning the best of NAB 2018 award for streaming media.

BirdDog makes and sells a range of NDI-capable television production equipment ranging from PTZ cameras, mini controllers, converters and software. Because their technology is scalable, BirdDog’s gear is found in venues as small as churches and classrooms up to network broadcast sporting events.

BirdDog devices can take SDI and HDMI and convert the formats to NDI, which delivers the signal to a switcher over a network via a single Ethernet cable. Because NDI offers interoperability between compatible devices, it works between the products of all equipment manufacturers.

Frank Beacham: The big idea behind BirdDog is you can do remote television production over a single network using NDI. Would you explain what NDI is and how it works?

Dan Miall: In modern production, when using computer systems, there are many different formats one can use. Our industry at large likes using acronyms, which makes it really, really challenging if you don’t know what those acronyms are, and you don’t have a glossary of terms right next to you.

One that’s really popular at the moment is NDI, for network device interface. It’s no coincidence that the name is similar to SDI. In a lot of ways, NDI is a replacement for using SDI cables.

The really big difference is with NDI being network-based, it means that you can have one video source that can go anywhere on a network. The moment you plug a computer or device that’s producing NDI video into a computer network, it’s available everywhere else on the network.

Essentially NDI is a replacement for what you’d normally use SDI for. You have many choices with NDI, whether there’s a camera, a graphics system, a video conferencing system or whatever else. When receiving video over NDI, you can choose what you want to do with it — record it or play it for audiences on a screen.

Frank Beacham: Is this system capable of working anywhere in the world with all devices at different locations?

Dan Miall: The big thing with NDI is the “N” part, which is the network.  You need to be on the same network for the devices to work purely with NDI. If you want to go further than that, there are more acronyms you need to add. You may have heard of SRT, for secure reliable transport. This is really important. When you’re doing television production over the internet, you need to make sure that your media is secured and encrypted once it leaves the building.

Frank Beacham: Does BirdDog gear work on all transport technologies?

Dan Miall: Yes. We deliver video wherever it’s needed. NDI is very much a basis of what we do and is easy to use with existing network infrastructures. It means the customer doesn’t need to lay new cables. But as soon as you go outside of that network, other technology choices need to be made.

We are about workflows. We have included all the needed technology under the hood for different scenarios. The user can choose what settings are needed for the application. A camera can be chosen and the signal sent to anywhere in the world.

Frank Beacham: You speak of NDI partners and relationships. What does that mean?

Dan Miall: Say you’ve got a camera made by BirdDog and a system made by another company — for example, a NewTek TriCaster. Anything that has NDI built in connects together. It is not like the concept of walled gardens, where certain network-based systems are locked down only for use with other equipment from the manufacturer. All NDI compatible gear works with each other, no matter who built it.

Frank Beacham: You are saying that someone with a TriCaster in one city can work with one of your cameras in another city?

Dan Miall: Absolutely! We have the BirdDog cloud. It allows one to see all cameras and other production equipment at any destination in the world and still maintain high picture picture quality. You can go over the internet and still get all the control. It’s as if you’re working right next to that camera, no matter where it is located.

Frank Beacham: How many cameras can your equipment support at once?

Dan Miall: We can handle 255 cameras on a single controller. But we’ve got customers that have over 750 devices on a single network.

Frank Beacham: You make a lot of PTZ cameras, all the way up to 4K weatherproof models. When you have someone trying to decide between a standard studio type camera and one of your automated PTZ cameras, what normally determines their decision?

Dan Miall: Three main things. One is space. You can put a PTZ camera in a room and it takes up a tiny amount of space and no local operator is needed. There are a lot of very small studios these days. Then there’s scale — if you’ve got a whole fleet of production cameras, you need to go in adjust each one of them. Our cameras can all be managed on one piece of software at the same time.

And the third thing is the image quality that you’re after. Our lowest-end cameras are used weekly on the NBA broadcasts every time you see the referee call what happens. When you move up our camera line, you get to full Sony one-inch sensors, which have the quality of a lot of production cameras. When you have more than one camera, it makes it a whole lot easier to have our remotely-controlled cameras. It cuts down on the number of people in the room and the amount of space required.

Frank Beacham: You have a range of customers from small churches and schools to corporations to network broadcast television. What’s the largest project you’ve ever done?

Dan Miall: In terms of scale, the biggest ones are corporate audio-visual. Some Fortune 500 companies have hundreds of meeting spaces and thousands of screens all around their buildings. We scale down to a small church that may have only one camera. Our line is not just based on technology, but on workflows. We can dial in exactly what people need. If your network is already built, our products are basically plug and play. The gear will find itself on the network and present the video coming out ready for use.

Frank Beacham: How do you compare the cost of BirdDog’s technology with traditional television equipment?

Dan Miall: You are looking at a fraction of the price to do a system with NDI. There are two major factors. The biggest thing is the infrastructure you’ve already got. If you have a network, you don’t need to run a whole bunch of new cables.

Also, you’ll find a lot of manufacturers making a new generation of NDI products. Where broadcast has previously had super expensive cameras and switching equipment, equipment built for NDI doesn’t cost nearly as much.

Frank Beacham: What’s the future for your technology? 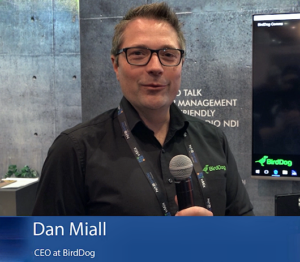 Dan Miall: We’ve got a five-year roadmap of products that we want to bring out. We see NDI is right now at the starting lines of where it can go. We’ve got cameras and converters and can now replace any traditional broadcast equipment.

I think in the next five years, we’ll go further into cloud-based solutions. At the moment, people talk about remote production in the cloud as needing a lot of computers in your building to get video to the cloud. We are working on putting all of that computing power directly into our cameras and into our converters. We’d take away the computing technology on the acquisition side and move it into the cloud. I think that’s a really big thing.

I think augmented reality is something that’s really quite exciting. All of our cameras now actually support protocols that allow you to do augmented reality. A great example of this is if you’re watching football, you can see the advertising in digital overlays on the live video. And there are a lot more uses. I think it’s going to be really exciting.

And moving further into wireless configurations — and I don’t mean Wi-Fi — but being able to take a device and putting it anywhere in the world and having it as part of your production. I think that’s a really interesting part of the technology and it’s where we are heading.