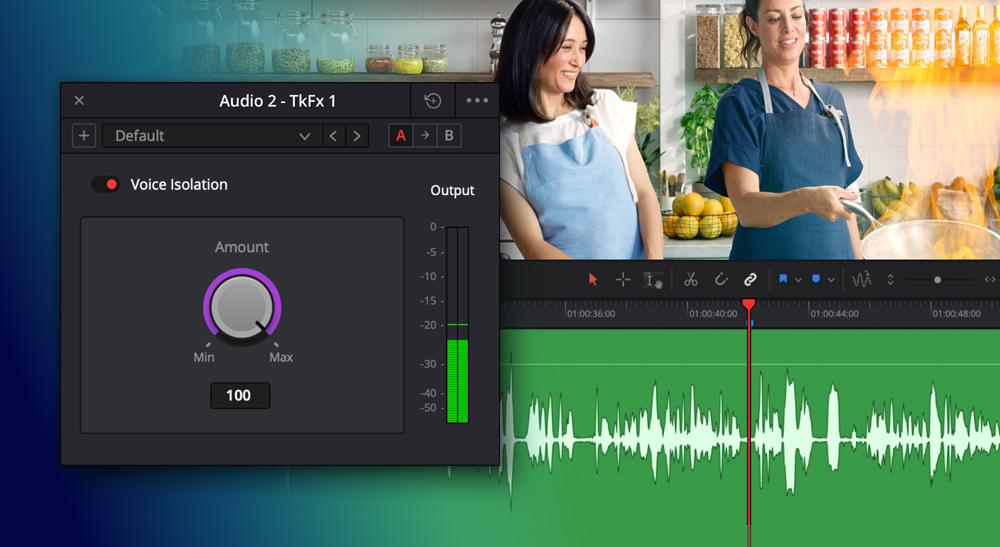 DaVinci Resolve 18.1 lets customers produce, export and post work quickly and easily on TikTok, Snapchat, Facebook shorts, Instagram TV and more. With added support for social media vertical resolutions such as 1080 x 1920, customers can choose square and vertical resolutions directly in project settings making it faster to setup a timeline to produce videos. Collaboration with other editors at the same time is also easier with the new timeline locking operation. This automatic operation prevents two users selecting the same timeline by locking it to the first user without the need to lock the whole timeline bin. Multiple editors can now work on different timelines in the same bin at the same time.

For audio, DaVinci Resolve Studio 18.1 adds new AI based voice isolation track FX so customers can remove loud, undesirable sounds from voice recordings. By adding DaVinci Neural Engine enabled voice isolation to the cut, edit and Fairlight pages using a new DaVinci Neural Engine AI based core effects process, customers can isolate dialog from background sounds in a recording, eliminating everything else from moderate noise to aircraft and explosions leaving only the voice. Voice isolation is perfect for interviews and dialogue recordings from noisy locations.

The built in dialogue leveler track FX in the inspector processes and smoothes dialogue recordings without the need for tedious level adjustments on clip gain or automation curves. Controls include real time scrolling waveform display, focus presets and three process options which allow customers to easily achieve natural sounding results. With the new vector keyframing of Fairlight audio automation curves, customers now have the ability to graphically enter, edit, trim and nudge keyframes with standard tools. Plus, there’s a new automation editing view which allows for faster and simpler management of curves and keyframes. DaVinci Resolve 18.1 also adds Fairlight grid support so customers can position clips on a grid based on timecode or musical tempo.

Editors now get a faster and smoother editing experience in this update with improved project importing when using ATEM Mini, so that audio is now attached to the video clips automatically making imported projects much easier to edit and helps improve workflows. DaVinci Resolve 18.1 adds DaVinci Resolve Speed Editor functionality to the edit page, including multicam switching, audio level, trim in, trim out and more! Plus, customers can use these functions in conjunction with the search dial for even more speed. There’s also support for subtitle track presets and per-track formatting rules. This means customers can now adjust individual settings for each subtitle caption, including font and style while retaining the track setting for size and background.

For Fusion users, customers can speed up their workflows with added support for magic mask in the Fusion page. The magic mask palette uses the DaVinci Neural Engine to detect animals, vehicles, people and objects, tracking their movement in a shot. Now customers can produce these clean traveling mattes directly in the Fusion page to add effects to characters or stylize the background. Plus, customers can now search for common keywords and categories for more than 200 tools. With this smart search functionality customers can filter the list without knowing the exact tool name to quickly find and apply tools to their visual effects.

DaVinci Resolve 18.1 also adds support for Dolby Vision 5.1.0 cinema trims, so customers can adjust the brightness levels of their high dynamic range images to optimize them for both cinema and television audiences. Customers can now also scale the DaVinci Resolve user interface incrementally to optimize the resolution for their specific Window or Linux display making it much easier to see the fonts on all aspects of the interface.

“This is a major update with new added support for social media vertical resolutions. Now, customers can work quickly and easily to create video posts for sites such as TikTok, Snapchat, Facebook shorts, Instagram TV and more,” said Grant Petty, Blackmagic Design CEO. “Plus, there are some other exciting performance improvements as well, such the new DaVinci Neural Engine AI enabled voice isolation tools, and new features for Fusion, such as support for magic mask. We’re always excited to see what our customers can do with these amazing updates to DaVinci Resolve.”

Product photos of DaVinci Resolve, as well as all other Blackmagic Design products, are available at www.blackmagicdesign.com/media/images.