Billerica, Massachusetts – In an effort to promote healthy eating for its patients and their families, Boston Children’s Hospital has recently introduced its own take on dinner and a show. About three times a month, the hospital produces a live, multi-camera cooking demonstration anchored by a Broadcast Pix™ Mica™ 1000 integrated production switcher.
One of the largest pediatric medical centers in the United States, Boston Children’s Hospital offers a complete range of health care services and more than 200 specialized clinical programs. Its new video production system was installed as part of a renovation of the hospital’s Fresh Food Court, which reopened in July. The dining area includes a Boston’s 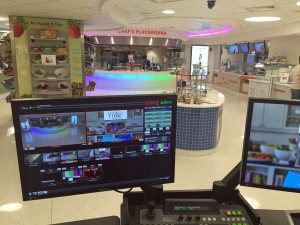 Childrens Hospital Micanumber of recognizable restaurant chains, but also features the Chef’s Playground, an interactive, made-to-order cooking station that focuses on healthy eating habits and nutrition.
Summer Menegakis, retail operations marketing manager, said the hospital’s executive chef, as well as guest celebrity chefs, teach patients how to prepare healthy meals at the station. “When they go home, patients are excited about cooking and they’re excited about eating healthy,” she said. “And they’re inspired to have their parents make these kinds of meals at home.”
The video production system includes four Vaddio RoboSHOT PTZ cameras, with two installed under the range hood to provide clear views of the cooking surfaces, one mounted to provide coverage of the prep station, and a fourth in front of the cooking station to provide a wide shot of the area. Audio is a unique challenge during productions because the fan in the range hood can be very noisy. The chefs are equipped with headset microphones, but handheld mics are also used so patients in the audience can ask questions and be heard.
Pro AV Systems in Chelmsford, Mass., handled the system design and integration for the hospital’s video production system. Rather than purchase separate components, Pro AV chose the Mica’s integrated system structure to provide a single user interface for camera control, switching, and graphics, as well as additional production tools.
“They wanted a single operator, easy-to-use system that they could grow with,” explained Mark Woods, director of engineering for Pro AV Systems. “The Mica was basically a one-stop shop for everything they wanted to do. It was much easier to use, but didn’t handcuff them into a basic system.”
At first, the video productions were going to be very simple, but the hospital has already added some sophistication with the Broadcast Pix system. Custom videos are produced for each guest chef, which are played through the Mica’s built-in clip store. Plus, the live output of the Mica is displayed on the LCD menu boards and two “portrait” video walls (composed of stacked 55-inch monitors on either side of the Chef’s Playground) in the food court during productions. “It changes the ambience of the space completely,” Woods said.
The Mica is housed on an AV cart along with two monitors, and is wheeled into the Fresh Food Court for productions. One monitor is dedicated exclusively to graphics, while the other is used as a more traditional TD video wall. The monitor setup was designed using Fluent-View, Mica’s customizable multi-view, while the lower-third graphics are created with the built-in Inscriber CG. All productions are broadcast live through the hospital’s in-house network and recorded so they can be replayed.
With the compact 1000 control panel, Menegakis handles all production duties during the cooking demonstrations, including switching, graphics, and camera control. “I am not a technical person at all,” she admitted. “The joystick makes everything pretty seamless. For me, I couldn’t ask for something simpler.”
About Broadcast Pix Founded in 2002, Broadcast Pix is the leader in integrated production switchers with broadcast, corporate, education, government, religious, sports, streaming, and visual radio customers in more than 110 countries. From compact systems with end-to-end integration to large-scale systems for high-end live productions, Broadcast Pix switchers feature Fluent Control, a patented combination of automation technology and performance tools to optimize workflows. Every switcher includes dual-channel CG and clip stores, ClearKey chromakey and virtual sets, file-based macros, external device control, and customizable multi-view. Broadcast Pix also offers ReVue slow motion systems, FX3D real-time 3D graphics, Rapid CG dynamic graphic playout software, VOX visual radio automation software, and patented control options for its switchers. Learn more at www.broadcastpix.com.
Broadcast Pix and Mica are trademarks of Broadcast Pix, Inc. Patented. Made in USA.