Making complicated requests work on a shoestring budget seems to be a threshold crossed by just about every film and television producer. Ideally, each production would have the appropriate budget allocated to ensure efficiency. However, that is rarely the case; crew members are often tasked with thinking creatively to find solutions. This is one of those stories. 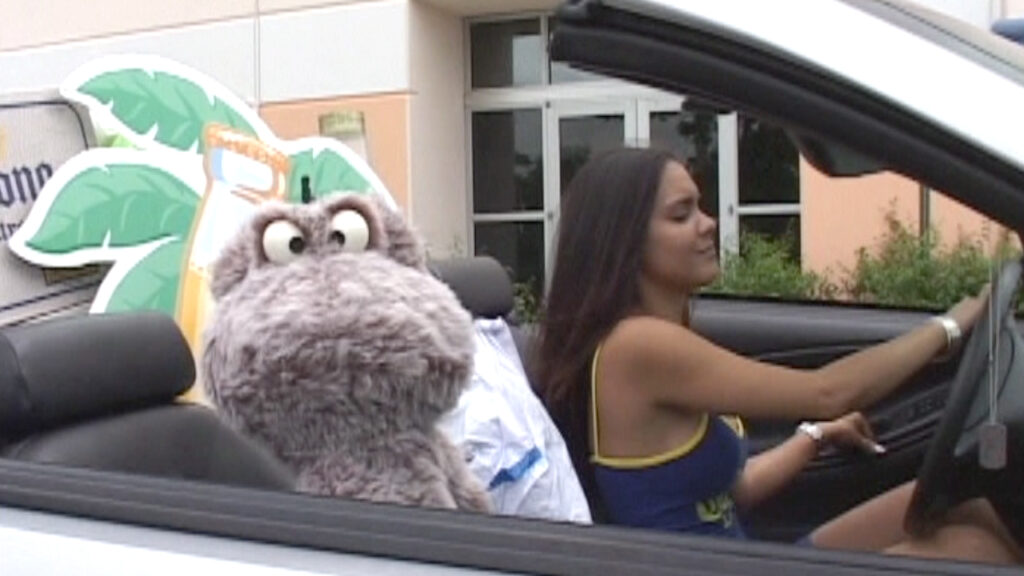 In 2002 a local radio station was hosting a competition for listeners to submit scripts starring the on-air DJs for a Halloween promotion. My company was tasked with producing the winning screenplay for a 30-minute film in time for the Fort Lauderdale International Film Festival (Corona and Brandsmart USA sponsored the film).

The budget was minuscule, and we met with station heads on the type of script to choose. To keep production costs down, we advised them to limit outdoor or night filming, creatures that would be large or require animatronics, and excessive effects such as helicopter shots or excessive gore. The script we received? A jungle adventure with an eight-foot-tall Chupacabra that ate people and tore apart a helicopter.

This was not feasible with this budget, not even for a campy project. We held a second meeting to propose an adaptation to the script that changed it from dark horror to a parody. Instead of an animatronic eight-foot beast in the jungle, we offered a two-foot puppet that ran amok inside the radio station itself. We suggested “Jaws featuring Elmo with Teeth. “They loved it, and we were now tasked with bringing this creature to life. 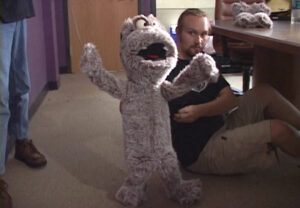 We reached out to an online puppet maker, who custom-made us two identical models to use for the project. Furry, cute, and cheap. We had our monster. What we didn’t have, however, was a puppeteer, and the budget did not allow additional crew, so we took turns operating the beast ourselves.

Resembling a Sesame Street reject, it was simple enough to operate. It had access from the bottom of the puppet and a hidden gap in the back of the head. Arms and legs were stuffed plush, and the legs had hidden snaps for easy removal.

We spent days bonding with our Chupacabra. We strapped thin wire rods to his hands for crude arm movement and practiced vigorously making his movements as natural as possible. Living creatures aren’t static, so we learned to add small gestures, twitches, head tilts, and dynamic mouth acting. Now that we had our star, it was time to get creative for filming.

Through the Eyes of a Predator 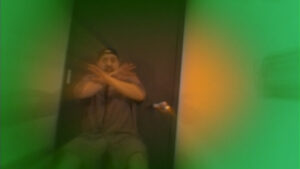 Following through with the Jaws pitch, we decided to have a portion of the creature interaction take place within the Chupacabra’s point of view when it was in “hunt mode.” This provided a cost-effective approach to using the creature and offered personality and a unique perspective from a monster the size of a toddler.

This also solved the major challenge of creature mobility. Simulating a tiny monster running, jumping, and attacking is far more feasible and flexible from a point-of-view perspective. It also invokes a sense of being stalked, increasing suspense, even in a comedy.

We implemented a “monster vision” filter to punch the effect up a notch. Utilizing a lens flare filter in After Effects, we expanded the parameters, stretched it, and colored it green to create the illusion of an “alien tunnel vision”—a cheap and effective solution. 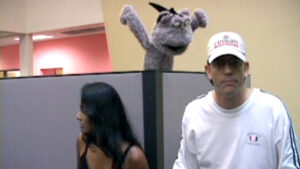 As convenient as the monster vision was, we would have to show the creature interacting with the cast and the environment at some point. Complicated green screen setups were out of the question, so we had to get crafty.

The first and easiest was having the Chupacabra pop up behind desks, cubicles, and other large set pieces. Rummaging around in tall grass, close-up shots, and posing the critter creatively on set helped provide a way to hide the puppeteer and arm rods.

Some shots involved the Chupacabra raising his arms, and unfortunately, the thin wire rods weren’t as subtle as we had anticipated and were easily seen by the camera. To fix this in post-production, we had to rotoscope around the wires in After Effects and take samples from previous frames to fill in enough of the background to paint out the wires literally. 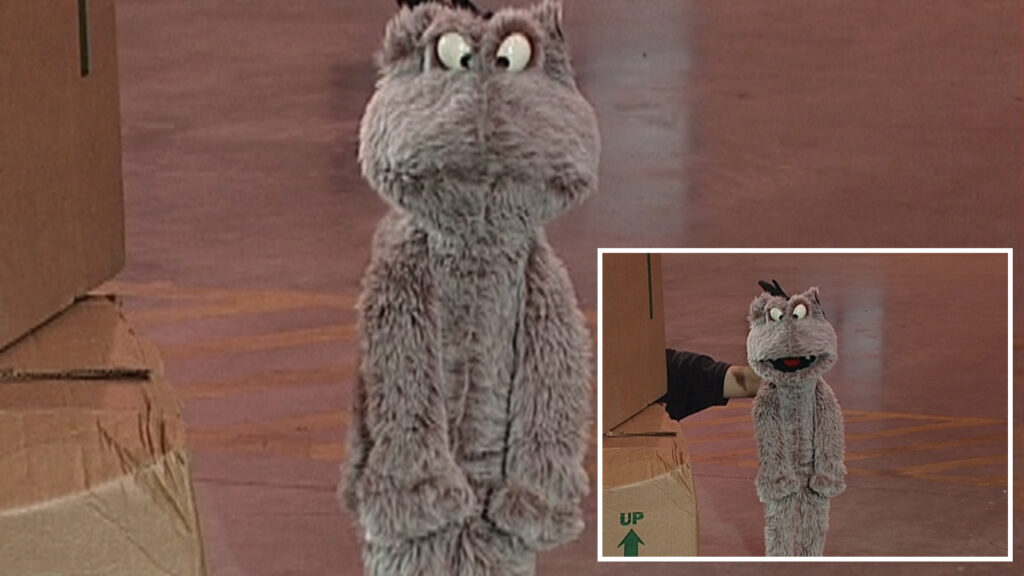 More ambitious still, to help sell the illusion of a living critter–as crude and silly as it was–we felt we had to include shots of it independently standing. We planned a couple of shots where the cast would turn to find the creature standing behind them, watching and waiting. These were wide shots—no walls, desks, or obstacles for a puppeteer to hide behind.

Rotoscoping was our best option here and, overall, was a very rudimentary yet effective solution. The shots were lit and staged, and the cast was in place. I then sat on the floor next to the beast, inserted my hand in the access through the back of his head, and held him up. I added little head tilts and twitches to give him some natural motion. After the shot was complete, everyone stayed in place, cameras continued to roll while I removed myself and our furry friend, and we recorded an empty background plate. With some quick rotoscoping back in After Effects, the Chupacabra was standing independently. The gasps of the audience confirmed we had sold the illusion. 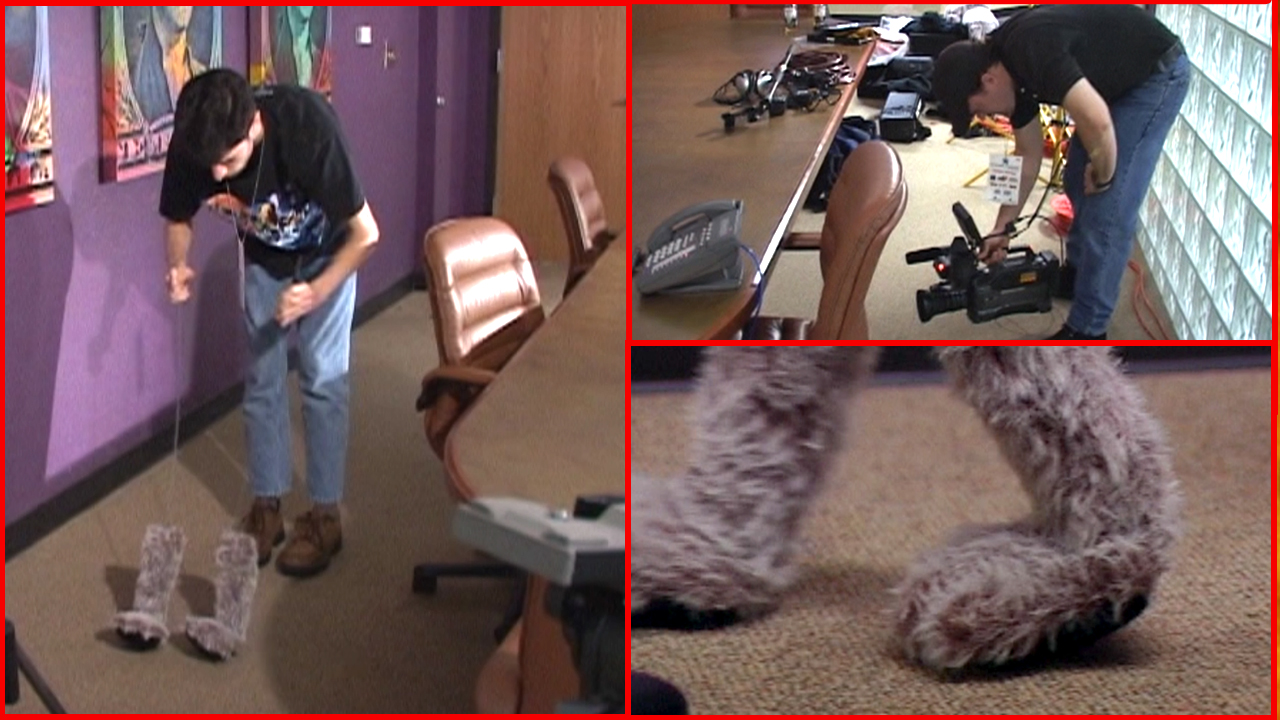 As effective as the rotoscoped shots were, we still felt the pressure of a restricted budget and an even tighter schedule, so we had to rely on additional tricks to give the creature more screen time. We employed basic tactics such as placing the camera behind the puppet to create an over-the-shoulder shot (puppeteer and metal rods out of frame). We utilized shadow play to show the creature without “showing” it. Boxes being knocked from shelves were enough to imply its presence in the warehouse scenes. Close-up shots of the removable legs on rods provided a walking solution. 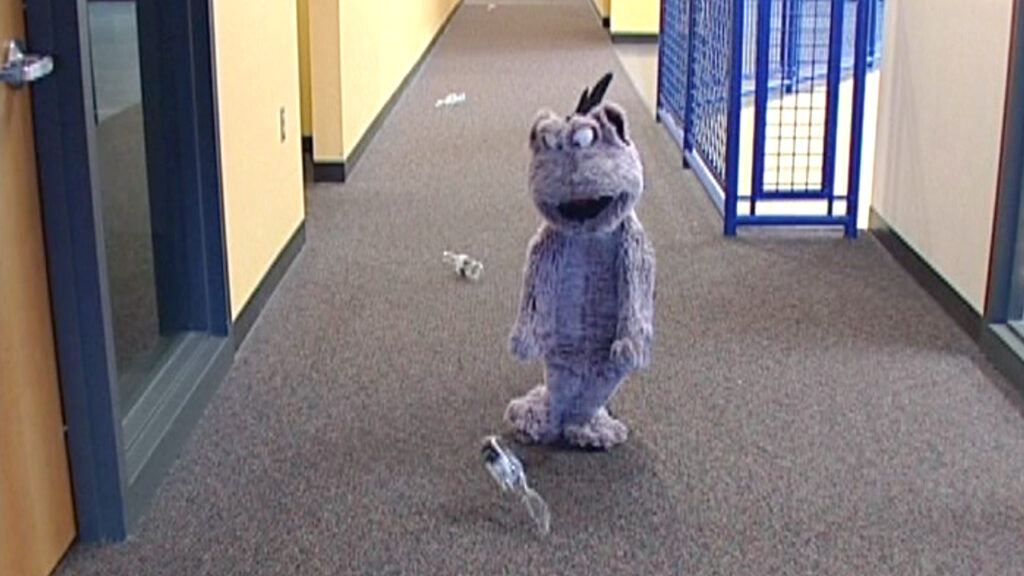 This Chupacabra had an affinity for Corona beer, and this film may have included a sponsor-pleasing montage of the creature tilting its head back in a binge. By squeezing a puppeteer onto the floor of a convertible mustang, the puppet could ride off into the sunset along with the Corona spokeswoman.

We knew going into the project that it would not be remembered for the merit of its plot. This was a fan-pleasing affair that relied on a gimmick, so we leaned into that gimmick with as many out-of-the-box solutions as we could conjure up. The best production stories come from the greatest challenges. At the end of the day, the fans were pleased, the sponsors and the station were happy, and no one noticed we omitted the helicopter.