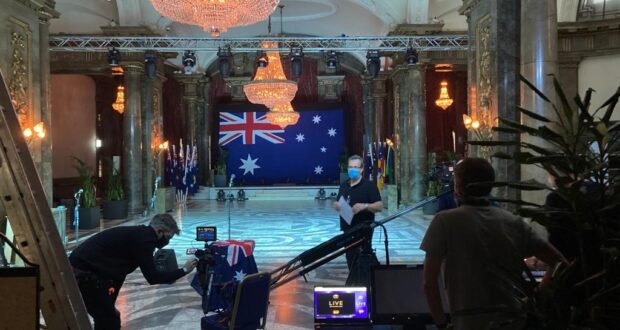 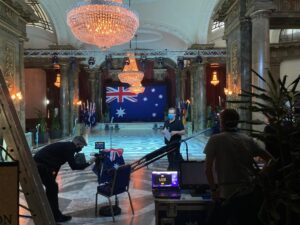 Production automation specialists nxtedition worked with Talbot Productions and Broadcast Solutions to create a virtual, streamed gala evening for the UK’s celebration of Australia Day 2021. The event, streamed live to invited guests, included music, special messages from famous Australians living in the UK and even a wine tasting.

The Australia Day Foundation, which raises funds to provide financial help for Australians to further their education in the UK, holds an annual gala, on Australia Day (23 January), in Australia House in London. The ban on gatherings because of covid-19 ruled this out in 2021, but the organisers were keen to create the same atmosphere virtually.

While the host, comedian Bec Hill, and musical theatre star Daniel Koek and band were in Australia House, to maintain social distancing there was a minimum crew on location, with nxtedition technology providing remote production. The 1080p output of three cameras, plus the mixed live audio, were packaged using Dream Clip Barracuda encoders into an SRT stream and sent over the public internet to nxtedition’s data centre, 1000km away in Malmö, Sweden.

nxtedition’s Adam Leah, working from his home studio in Marieholm, a further 30km away, switched the programme live using nxteditions automation and shotbox to control the router, video servers, graphics servers, vision mixer and audio desk back at the Malmö data centre. He also played in pre-recorded elements of the evening to create the complete live event. As well as being delivered to the ticket holders, the nxtedition system also sent a reverse video feed of the live output back to London, again as SRT over the internet, along with the prompter script and Trilogy communications.

“The client wanted the same high production values as we are used to delivering in real life,” said Charlie Talbot of Talbot Productions. “I had worked with nxtedition before, and I knew just how incredibly powerful their remote production capabilities are. Everyone was really impressed with the way we tackled the challenges of creating an engaging and immersive virtual gala dinner. Even when we can ease the restrictions on people, remote production is going to be the way to go on events like this, reducing the crew we need on site without compromising quality or capabilities.”

For nxtedition, Adam Leah said “We created an entire evening’s event, with six people on site: three cameras, two lighting operators and an audio mixer. Because of the way that nxtedition is designed, I could monitor and switch the show based on the script, with pre-recorded inserts dropping in as we got to the right point in the show. Even though it was a long event and I was the only person in control of the production it was not stressful. This is another exciting demonstration of the capabilities of remote production to deliver very high standards to a whole range of events.” 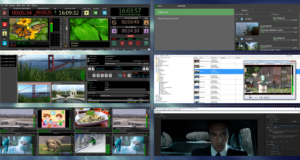