Zulu
THE BEAT:
Home » 2014 NAB Show » Broadcast Beat To Produce In The Cloud at #NABShow with Forbidden Technologies @forbiddentech 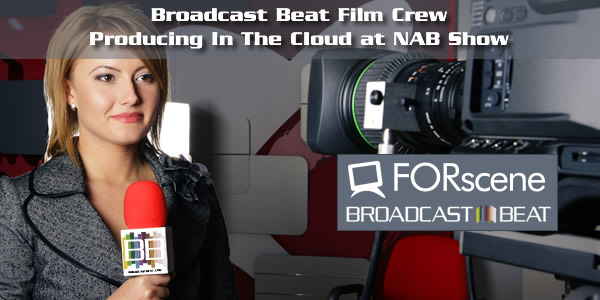 Intent on delivering the absolute best and latest in studio industry news and information, the online magazine – www.broadcastbeat.com – is announcing its partnership with Forbidden Technologies – providers of the hi-tech Cloud-Based Editing Platform “FORscene.”

“Cloud-based workflows are becoming more prevalent as the technology and Internet speeds increase,” states Ryan Salazar, Broadcast Beat Magazine Founder and Chief Editor.  “Being able to edit feeds from a Web browser and then distributing that content to where it needs to go saves both valuable time and money, giving content producers the ability to maximize their resources.”

Forbidden Technologies and Broadcast Beat Magazine have joined forces for the upcoming 2014 NAB Show in Las Vegas, Nevada, April 5-10, 2014 at the Las Vegas Convention Center.  Forbidden will provide its award-winning cloud-based editing platform for Broadcast Beat Magazine’s on-location video crew in Las Vegas and their remote post-production facility located in Fort Lauderdale, Florida. The crew will shoot video and then upload it into the cloud between shoots. Broadcast Beat’s production facility in Fort Lauderdale will then start editing that footage in the cloud via Forbidden Technologies’ FORscene editing platform.

A web-based platform allows hardware-independent applications and instant usage.  Multiple users can access content anytime/anywhere, making this the ultimate in post-production workflow network solutions.  And because it’s SaaS (“Software as a Service”) with a monthly fee, it has no expensive up-front cost and its speed and efficiency is limited only by the Internet connection.

Different post-production workflow strategies for broadcast, sports and news applications assure a seamless integration with other systems quickly and easily.

It is the future.  No longer will you have to worry about updating your software, because cloud-based software is always kept up-to-date with the current revisions; nor will you have to stop the workflow to update or worry about content saved in an outdated legacy format.  In fact, Forbidden Technologies’ devotion to customers has recently lead to new features and integrations for its market-leading platform.  All the new features, as well as Forbidden’s new logo and branding, will be on display at the 2014 NAB Show in booth SL5305.

About Forbidden Technologies plc
Forbidden Technologies plc is an award-winning technology company that develops and delivers cloud-based solutions for collaborative video post-production. Its flagship product, FORscene, is one of the world’s most advanced cloud-based video post-production platforms. Launched at IBC in 2004, FORscene has been used to log, edit, review, and publish more than 3 million hours of professional video content. Quoted on the London Stock Exchange Alternative Investment Market, Forbidden Technologies partners with high-profile media and technology organizations including Atos, BIM, deltatre, EVS, and Key Code Media for a far reach into the global market. More information about FORscene can be found at www.forscene.co.uk. More information about Forbidden Technologies can be found at www.forbidden.co.uk.

Broadcast Beat Magazine knows a great product and is proud to be partnered with such a fine technology firm as Forbidden Technologies. www.forbidden.co.uk/.