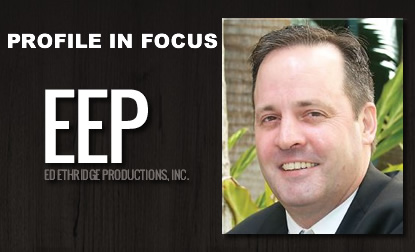 Broadcast Beat Magazine’s Profiles in Focus Series recognizes those people who deserve to be recognized for their outstanding presence in the field and/or contributions to the industry, but probably will be overlooked.  This series aims to ensure that those who are worthy of attention receive it and that their achievements are lauded.

For award-winning video producer and founder of a Production company that bears his name, Ed Ethridge, a fifth-generation Fort Lauderdale resident, guitar-playing father of two sons, is not short on talents.

After receiving a degree in Communications from the University of Florida in 1989, he became part of the Teleview Racing Patrol and, as cameraman, technical director, editor, director of broadcast advertising for Calder Race Course, he handled all aspects of television production for the three major Thoroughbred racetracks in South Florida (Gulfstream Park, Calder Race Course and Hialeah Race Course) including onsite installation, satellite uplink/downlink, tape operation, graphic design, technical direction and editing and directing nightly television programming.

In June, 1999, he joined the Zimmerman Advertising team, where he was charged with overseeing the video post-production environment and worked with various creative directors, bringing their visions to the small screen.

“He’s the most organized editor I know who’s doing post-production process,” says Ryan Salazar, an ex-co-worker at Zimmerman Advertising. “He is an expert manager and highly experienced in all aspects of productions, including 3D animation, engineering, editing, directing and shooting.  He should be his own boss!”

While established as one of the preeminent video production and post-production houses on the East Coast, EEP has expanded to include strategic marketing, public relations and social media services, emphasizing the production and effective use of video content. By staff with a passion for creating targeted messaging and getting it in front of customers, they believe content isn’t content without video – their zeal is to take charge of the awesome power of this burgeoning medium and show people how they can use it to reach a larger audience and motivate more customers.  For more information, go to www.ethridgeproductions.com.

After unleashing the power that is video, Ed gave back to the community (a core business tenet and personal value) and was named “Chamber Hero” in October, 2012, by the Greater Fort Lauderdale Chamber of Commerce because he donated his company’s time and services to produce a branding video for the Jessica June Children’s Cancer Foundation (JJCCF) that helps the organization raise much-needed funds and awareness for families in crisis fighting childhood cancer.

Broadcast Beat Magazine’s Profiles in Focus Spotlight has put you on Front & Center Stage!  Congratulations on your accomplishments and successes, and may you forever be recognized as someone who has made a difference in the industry!

Follow me
Latest posts by Ryan Salazar (see all)
Ed Ethridge Ed Ethridge Productions Profiles in Focus 2013-12-12
Ryan Salazar
Previous: Triveni Digital® Saves The Day… With New Functionality For Mobile Emergency
Next: Next Up To Enter The Cloud: Centralcasting