“We are thrilled to provide live transmissions of the special event commemorating the anniversary of Rocky IV and the franchise’s message of unwavering determination to fulfill one’s dreams,” said Mike Savello, LiveU VP of Sales, Americas. “The LU800’s ability to transmit four fully frame-synced full-HD feeds from a single portable unit changes the economics of remote production and gives companies like BMG the ability to deliver high-quality live content to movie screens, televisions and mobile devices.”

The live production featured a 20-minute live pre-show, followed by a 25-minute Q&A with the Star, Writer and Director, Sylvester Stallone followed by the premiere of the film to audiences at 700+ Fathom Event Theaters nationwide.

The production was shot with eight Grass Valley broadcast cameras including a jib in the theater, plus two cameras on the red carpet. BMG’s CEO Todd Mason directed on site the live broadcast from BMG’s REMI Mobile Unit One. Signals were sent from two LU800 field units back to the BMG REMI broadcast hub in Las Vegas and then uplinked to Fathom Theaters. 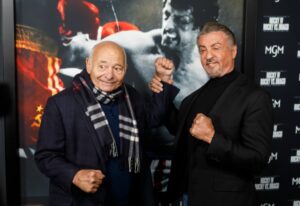 To learn more about the LU800, visit: www.liveu.tv/products/create/lu800