Billerica, Massachusetts – Broadcast Pix™ today announced that its Rapid CG software, which uses templates to easily create customized graphics, now integrates with Rundown Creator, a Web-based collaborative software platform for producing rundowns and scripts for live news and other programs. Information for lower-thirds and other graphics included in a Rundown Creator script can be exported to Rapid CG and automatically inserted into existing templates to simplify live production graphics.

“Our integration with Rundown Creator saves time and reduces errors,” explained Steve Ellis, CEO of Broadcast Pix. “Information for lower-thirds, over-the-shoulder graphics, and other graphic elements can be exported directly from Rundown Creator to Rapid CG as an XML file, 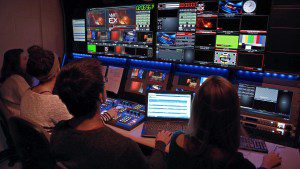 and then automatically incorporated into templates in show order. That means the CG operator Rundown Creatordoesn’t have to input the data a second time or reorganize it.”

Twice a month, students produce Current OC, a 15-minute newscast that is distributed on local access channels. Trauger wanted a smarter way to bring in graphics data so students would not have to retype it – and they would not have the option of using different fonts. The integration between Rapid CG and Rundown Creator gives Current OC the “feel of an actual branded show,” because the fonts remain consistent. “It really simplified and streamlined the CG process,” he added. “I think it’s great.”

“We’re happy to be working with Broadcast Pix because our technologies really complement each other,” said Jeff Zimmerlin, founder of Rundown Creator. “We’re excited about this integration, and so are many of our customers.”

Based in Pasadena, Calif., Rundown Creator has an extensive list of clients, including CNN Latino, Detroit Public TV, MLB.com, and numerous schools and universities. Its collaborative software runs via a Web browser on desktops, laptops, tablets, or mobile devices. With its real-time updates, changes in scripts and rundowns appear in everyone’s browser instantly. Other features include a built-in prompter that pulls content directly from rundowns and scripts, including real-time changes, and exports text to third-party prompter systems.

Using templates built with the CG included in Granite, Flint™, and Mica™ integrated production switchers, Rapid CG’s drag-and-drop operation makes it easy to integrate databases, RSS feeds, and custom actions like scorekeeping into graphics for live news, sports, and election coverage. It only operates within specific fields, so the data changes, not the templates.

Available in two versions, the dual-channel Rapid CG 3 and the “light” Rapid CG LT, the optional software also connects to Twitter and other cloud-based data sources, which allows the audience become part of the production. Rapid CG 3 adds dual-channel connectivity and support for OES Scoreboard data and Web-based XML databases, and allows sports scores in league databases to automatically flow into on-air graphics.

About Rundown Creator Developed by a former TV news professional, Rundown Creator is affordable, Web-based collaborative software that allows teams to work in real time to create rundowns and scripts for TV, radio, and Internet shows. You can access Rundown Creator through the Web browser on any desktop, laptop, tablet, or mobile device. We offer affordable pricing with no hidden fees, and offer discounted rates for educational institutions. Sign up for your free trial at www.rundowncreator.com.