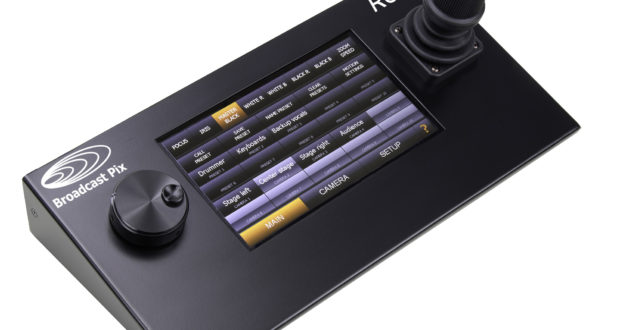 With its software-defined open architecture, RCC can be customized to control different types of cameras and support gear – including PTZ cameras, broadcast cameras, and robotic heads – and mix IP protocols within the same production. An integrated seven-inch touchscreen provides intuitive menu navigation to cameras, shot presets, camera settings, and system setup. Users can also customize the number of cameras and camera presets as needed, as well as camera and preset shot names for easy recall.

“As IP-based PTZ cameras continue to get more and more use in live productions and government meetings, some organizations want the flexibility of a separate camera control unit,” explained Tony Mastantuono, product manager. “The interface for our RCC is very intuitive, so even non-technical personnel can easily setup shots and access presets, and the joystick lets you perform smooth on-air moves and adjustments.”

RCC features a high quality precision encoder, and includes native IP support for Panasonic and Sony PTZ cameras. Support for other cameras and robotic heads is available as a separate software option. RCC will be available in Q3 2019.

About Broadcast Pix
With a tightly coupled switcher and 3D motion graphics CG, Broadcast Pix provides the most fully integrated live video production systems with patented control and automation technology. From compact units to large-scale, multi-system solutions, every Broadcast Pix features an extensive toolset that makes it easy to optimize and customize your workflows locally and over IP. Plus, its BPNet ecosystem provides secure cloud services and asset management. Founded in 2002, Broadcast Pix has customers in more than 100 countries and is the leader in fully integrated production switchers for government, broadcast, streaming, live event, and visual radio applications. Learn more at www.broadcastpix.com.