Billerica, Massachusetts – Broadcast Pix™ will demonstrate its new Roadie portable integrated production switcher, as well as new software upgrades that include a “Show Transfer” utility and support for embedded audio across its Flint™, Granite™, and Mica™ product lines, at InfoComm 2015 (Booth 3621), which runs June 17-19 in Orlando, Fla.

“When we developed Roadie, our primary goal was to create an affordable system that could take the abuse of location 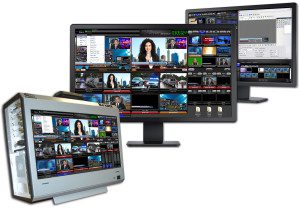 Roadie’s integrated 17.3-inch HD display, a resistive touchscreen with a scratch resistant top coat, is protected during transport by a removable cover. The system includes a keyboard and mouse, but can also be controlled through the built-in virtual panel, optional control panel, or an iPad using the iPixPanel app.

The new Show Transfer utility, included with Roadie and featured in Version 4.5 software for Granite and Mica as well as Version 3.5 software for Flint, allows organizations to back up and move all elements of a program – including graphics, clips, and macros – between Broadcast Pix systems. It also makes it easy to maintain redundancy between systems or upgrade to a new Broadcast Pix system.

“Show Transfer simplifies the sharing of production elements between multiple systems, such as a main control room, a production truck, and a Roadie system,” Ellis explained. “Our customers who saw Show Transfer demonstrated at NAB in April loved it, but they were also excited about our support for embedded audio and the new integrated PixPlay slo-mo functionality.”

Ideal for almost any sports application, PixPlay allows any Broadcast Pix integrated production switcher to provide slo-mo control to a Blackmagic HyperDeck or AJA Ki Pro disk recorder. An operator can replay footage manually using controls on the front panel of the HyperDeck Studio or Ki Pro – but with PixPlay, VTR control is ported to the production switcher along with six preset replay speeds. Users can also “scrub” or single step through a scene for better control and functionality, as well as mark an unlimited number of “in” points as part of a playback EDL for preparing a highlight reel.

The V4.5 upgrade also adds embedded audio for Granite and Mica systems, which takes an analog line in and embeds it on the SDI outputs. (Flint already supports embedded audio.) For Granite X, Broadcast Pix’s flagship integrated production switcher, the upgrade adds a second key/cut channel, which is ideal for providing a second external CG input. Plus, API integration allows Crestron or AMX to control virtually any portion of a Broadcast Pix system. Both new software versions also include bug fixes and other enhancements.

Roadie is available now and pricing starts at $12,495. Optional accessories include a soft carrying case with shoulder strap and custom hard rolling case. V4.5 software is free for Granite and Mica customers who have Version 4.0 or are under warranty. Flint V3.5 software is free for Flint customers under warranty or currently using V.3.0. PixPlay is also available separately for $495.