“We are very excited to bring Roadie to IBC for the first time. In fact, it’s portable enough to bring on the plane as one of my carry-ons,” said Steve Ellis, CEO of Broadcast Pix. “This is a ruggedized portable 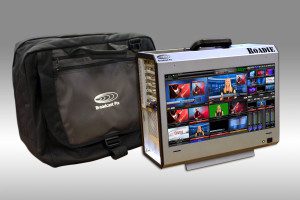 production solution with all the tools and simplified workflow you expect from OLYMPUS DIGITAL CAMERABroadcast Pix, along with built-in HD streaming and recording and an eight-channel audio mixer to keep clutter to a minimum on location. It’s perfect for live productions with limited staff or a single operator.”

Equipped with a built-in handle for easy transport, Roadie weighs about 20 pounds and features a durable aluminum alloy chassis. Protected by a removable cover, its integrated 17.3-inch HD display is a resistive touchscreen with a scratch resistant top coat. The system includes a keyboard and mouse, but can also be controlled through the built-in virtual panel (add a second touchscreen), optional Broadcast Pix 500 or 1000 control panel, or an iPad using the iPixPanel app.

Roadie is a multi-format production switcher that features up to four SDI/HDMI and two IP inputs, along with eight internal switcher channels (two clip servers and six graphics). Audio is available via balanced or embedded audio that can be mixed with internal clip audio. The system natively supports Avid DNxHD and Apple ProRes formats, which can be imported via multiple connected network folders.

All sources – including cloud-based content from Skype, Twitter, and more – can be included in live productions, and are automatically ingested and scaled while maintaining lip sync. Roadie also includes two network inputs, as well as built-in Wi-Fi to accommodate a hotspot for connecting to cloud-based services. Plus, with the new Show Transfer utility, operators can back up and move all elements of a program between Roadie and a Broadcast Pix Flint™, Granite™, or Mica™ system installed in a separate control room.