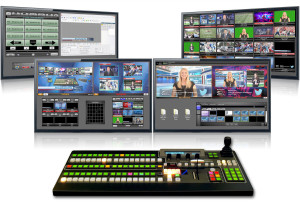 Billerica, Massachusetts – Broadcast Pix™ will debut Version 5.0 software for its complete line of integrated production switchers at IBC2015 (Stand 7.B21), which runs Sept. 11-15 at Amsterdam RAI. The upgrade features Virtual Set Studios, an enhanced toolset for creating high-quality virtual environments, and Router Control, which allows any Broadcast Pix system to include external sources in live productions. 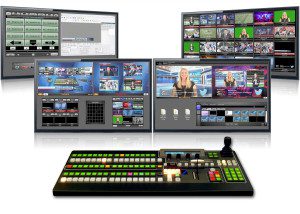 part of the Fluent Control toolset for years, but our new Virtual Set Studios lets you go beyond the basics,” explained Steve Ellis, CEO of Broadcast Pix. “It’s very easy to use and integrates seamlessly with our advanced ClearKey chromakey to deliver even more realistic results.”

Router Control works with AJA Video Systems KUMO SDI routers to extend the I/O of the production switcher through a simple TCP/IP connection. A cost effective option for facilities with multiple sources feeding other house equipment, it allows easy cross-point control of router sources to router destinations feeding a Broadcast Pix system. Custom names on the KUMO router are automatically mapped to the Broadcast Pix Multi-View as an under monitor display (UMD) and on the panel through patented PixButtons. Plus, AJA router panels and Web-based control offers bi-directional control, so any change on the Broadcast Pix system is reflected on AJA router panels and Web-based control systems (and vice versa).

While Broadcast Pix systems already control a number of external devices, V5.0 adds control for Matrox Monarch HD streamer/recorder appliances, so all Broadcast Pix systems can stream and record HD video. The upgrade also provides support for Sony IP-based PTZ cameras, including preset positions. Both the cameras and the streaming appliances can be controlled directly through the PixPad. Additional upgrades include new format support, source-based control for enhanced DVE positioning and cropping, and auto-detect capabilities for every input to simplify setup.

Broadcast Pix will also demonstrate additional software upgrades that were introduced earlier this year. The Show Transfer Utility allows organizations to back up and move all elements of a program – including graphics, clips, and macros – between Broadcast Pix systems for consistency and redundancy across multiple
installations. PixPlay ports VTR control from a Blackmagic HyperDeck or AJA Ki Pro disk recorder to a Broadcast Pix production switcher for slow motion replays during sports productions. Users can scrub or step through a scene with better control, plus mark points to easily create a playback highlight reel.

Version 5.0 software will be available later this year for all Flint™, Granite™, Mica™, and Roadie™ integrated production switchers. It is a free upgrade for customers who are still under warranty, while other users can upgrade for $995.