Billerica, Massachusetts – Broadcast Pix™ has announced its Slate Upgrade Promotion, which allows current customers to trade in an existing Slate™ integrated production switcher for a new Granite™ or Mica™ system. The new systems offer a number of improvements over Slate, including native HD production, dual-channel clip servers that hold up to 180 hours of graphics and animations, and expanded production toolsets.

“Since 2006, Slate has been a solid integrated production switcher for thousands of video professionals around the 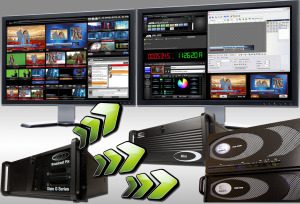 world,” said Steve Ellis, CEO of Broadcast Pix. “This trade-in promotion provides those customers with an easy upgrade path to native Trade-In PromotionHD production and enhanced workflow tools – and they can save more than $4,000.”

Granite is Broadcast Pix’s large-scale system with up to 22 SDI inputs and 12 SDI outputs. Mica, the company’s mid-size model, includes eight SDI inputs as well as six SDI and two DVI outputs. Both systems support eight channels of file-based content and can ingest cameras in multiple formats, as well as cloud-based content and data from RSS feeds, Twitter, and other sources. The systems ingest and scale all sources with low latency while maintaining constant lip sync.