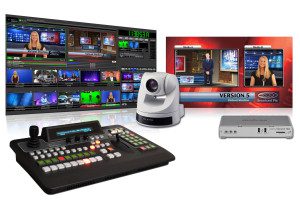 ClearKey™ chromakey technology with sophisticated virtual backgrounds for up to eight cameras. By preserving shadows and other natural lighting in the set, on-screen talent looks like they are in a virtual environment, not pasted onto a set background. Unlike other Version 5.0 Softwarebasic integrated virtual sets, Virtual Studios allows multi-box DVE compositions to be scaled to full screen or squeezed back into the box effect – and does not require optical camera tracking systems.

The Virtual Set Moves feature saves up to four moves per camera without optical tracking systems, allowing operators to zoom, pan, and tilt into the virtual set – and then recall various moves with a user-defined speed. The result is virtual camera movement without using extra keyer resources and camera operators. All moves and background assignments are saved on a per show basis, so it is easy to switch looks between different productions. Plus, the AutoFlags feature allows you to use any still background to fill in the black pillarboxes on the sides of a 4:3 image in a 16:9 production.

“Our customers are going to be amazed with Virtual Studios, which is very easy to use but delivers far more realistic results than a simple drag-and-drop solution,” said Kevin Prince, president and CEO of Broadcast Pix. “All the improvements in Version 5.0 enhance our integrated platform and make it easier to produce world-class productions with limited personnel.”

With Source Controls, it is easy to reposition logos, squeeze video to compensate for incorrect aspect ratios, and fix other content issues in real time, rather than exporting the content and correcting it offline. Source Controls takes advantage of Broadcast Pix’s patented technology for low constant delay by allowing live cameras, as well as internal clips and graphics, to be resized and moved via DVE before being applied to a keyer. Adjustments are not globally assigned, which allows custom settings on individual pieces of content. Plus, adjustments can be saved as a macro for easy recall of source presets.

V5.0 software also expands robotic camera control to a number of IP-based cameras, including Sony BRC-Z330, BRC-900, and SRG-300 models and Marshall Electronics models. Vaddio camera systems have also been added, with IP and serial control of the RoboSHOT, ClearVIEW, and PowerVIEW camera lines. Up to 12 cameras can be controlled through one Broadcast Pix system, including a mix of different models and manufacturers. Presets can be saved for easy recall, and built-in tally feedback is sent to cameras to display on-air status.

Also new for V5.0 is integrated IP control of Matrox Monarch HD and Monarch HDX streaming and recording appliances. Streaming and recording can be controlled individually, or users can program a macro to create a one-button push start for both functions. Recorded programs can be stored on an attached network drive or USB drive – or directly connected to Broadcast Pix’s Watch-Folders for a truly integrated workflow. Files can be played back natively in the clip store or copied to NLE systems for editing.