Billerica, Massachusetts – Broadcast Pix™ today announced two special bundle sales promotions launching at IBC2015 (Stand 7.B21), which runs through Sept. 15 at Amsterdam RAI. Both bundles offer a choice of two free software options worth up to $995, including new PixPlay slow motion control, Router Control for expanded I/O, or an additional soft panel license, for use with any Broadcast Pix integrated production switcher. The Production Bundle is available with the IBC Promo Bundlepurchase of any camera control option, while the Broadcast Bundle is included with the purchase of any VDCP server control option. 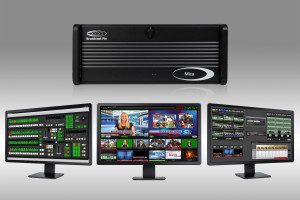 Broadcast Pix. “This is a unique opportunity to upgrade your Broadcast Pix system and add your choice of two additional tools or upgrades for free in the process.”

Router Control extends the I/O of the production switcher through a simple TCP/IP connection to an AJA Video Systems KUMO SDI router. A cost effective option for facilities with multiple sources feeding other house equipment, it allows easy cross-point control of router sources to router destinations feeding a Broadcast Pix system. Additional router options will be available in early 2016.

An additional soft panel license works on any touch screen to provide full control of any Broadcast Pix integrated production switcher. The network-based solution works anywhere, so a system can be controlled from an off-site location, if necessary.

Both the Broadcast Bundle and Production Bundle will be available through Dec. 29, 2015.