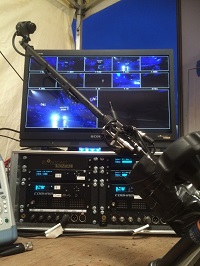 An additional Cobham Solo7 Nano TX was attached to a “bullet-cam” deployed on a selfie-stick for use by attendees and artists alike.

United Production Operations Manager Bolke Burnaby Lautier said, “MTV always likes to use lots of effect shots, which is where the roaming cameras came into play. They also like to provide the artists with something they can have fun with and contribute to the broadcast, which is where the selfie-stick was used. The reliable signal quality of the Solo7 Nano TX coupled with the Videosys controls, both provided by Broadcast Rental, enabled us to produce a high quality broadcast of a world class event.”

GP Slee, founder and CEO of Broadcast Rental, said, “Because of the fast pace and high production values, covering events like this can be quite a challenge. However, because we are wireless specialists, we knew the Cobham/Videosys combination of wireless transmission and data control would provide high quality pictures and 100 percent control reliability.”