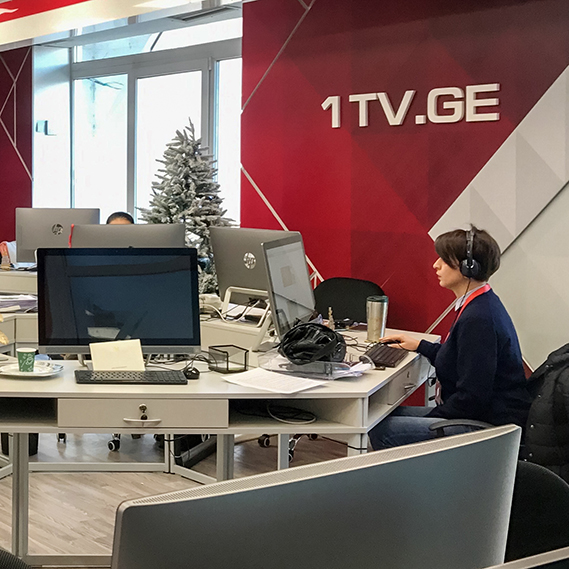 Following the ambitious aims of Georgian Public Broadcaster (GPB) to transform workflows and renew technology and equipment in their MAM and playout infrastructure, Broadcast Solutions Group managed a comprising modernisation project for GPB that includes engineering, delivery and implementation of key production components.

The Georgian Public Broadcaster (GPB) is one of the country’s largest producers of Georgian original programs and documentaries and hosts two TV channels and several radio programmes. Today, 85% of the Georgian population receive the broadcaster’s programmes, which are also seeded by satellite and over the Internet in several European and Asian countries.

George Kumsiashvili, CTO at GPB, commented on the modernisation: “We replace our legacy production equipment with high-tech systems. GPB focuses on new forms of production. The project of technical and technological re-equipment of the broadcaster is noteworthy. This project pushes our Georgian First Channel programme to be one of the region’s most modern and high-tech media outlets. Additionally, the project design pays great attention to data protection and information security components.”

Broadcast Solutions implemented a traffic system to enable GPB to plan and produce in the long term and with ad hoc immediacy necessary for news programmes. The system was customised to meet their needs to interact with Georgian advertising agencies. This included a particular localisation of user interfaces and metadata adaptation to the Georgian language. ETERE centralised ingest system and content gathering for the whole GPB complex allows for systematisation of archive materials besides performing operational tasks for file ingest and 32 channels baseband ingest simultaneously.

The automated On-Air playout system was implemented for GPB’s two TV channels with the possibility of further extension. With this upgrade, GPB works in HD, but all principal parts of the solution are ready for switching to UHD without essential investments.

As for graphics solutions, GPB and Broadcast Solutions opted for ClassX used in GPB’s broadcast production, starting from creating graphics and planning up to automated playout under automation control.

The MAM and file-workflow management tool from ETERE streamlined the production workflows, thus allowing to combine several GPB departments into one single unit and fostering the interaction of the new infrastructure with the existing postproduction systems.

As part of the modernisation process, GPB updated their IT infrastructure with equipment from HP, Arista and several others that integrate with modular high-performance storage for Post Production & broadcast – dynamic drive pool, ARDIS.

During the complete project, both partners paid particular attention to the training of GPB staff from various departments and the support during the first months of on-air operation with the new workflow. Part of Broadcast Solutions’ consultancy was the implementation of a new organisation and operation scheme for GPs employees that were associated with the technological and workflow changes.

The complete project was managed and delivered during and despite the Covid-19 limitations and challenges. Therefore, Broadcast Solutions deployed a setup on-site and remote provisions for training, tests, and acceptance proceedings.