SYDNEY, AUSTRALIA, DECEMBER 11, 2014—When up-and-coming filmmaker Sophia Morton’s short film, Stew, was awarded Best Cinematography at the 24/7 Youth Film Festival, Miller Camera Support Equipment, a leader in the production of innovating camera support solutions and long-time supporter of the competition, subsequently awarded Morton with an Air Tripod System so that she may continue to pursue her filmmaking passion while working on professional-grade equipment. 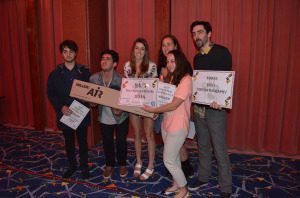 The 24/7 Youth Film Festival, which encourages young people of ages 12 to 24 to tell their stories through filmmaking, is a fast-paced competition that requires participants to make a seven-minute short film in 24 hours. The film must include special items, dialogue and locations, stipulations that are only made known to the teams at the beginning of the 24 hours.

“We were so stoked,” says the 19-year-old. “24/7 is such a fast-paced film festival, so every second was crucial and it was important that we didn’t waste any time fiddling with the equipment to set up the perfect shot. We actually worked with a Miller tripod on the production of Stew and were so impressed with its light weight and flexibility. So, the fact that we’ve now won one is so surreal!”

Produced in partnership with a few of Morton’s classmates—Thomas Aslanian, Polina Pashkov, Samuel Allen, Sebastian Reategui, Cadhla Roberts, Claire Stokes and Ellen Wiltshire—from the University of Technology (UTS) in Sydney, Stew is a film that focuses on an altruistic woman who hands out free dinner to homeless people. But, along her journey, audiences become surprised as they discover the horrifying solution she cooked up to get people off the streets. The film was awarded Best Cinematography, Best Script, Best Sound, People’s Choice, as well as Best Leading Actor for the film’s leading lady, Claire Stokes.

Since the festival’s inception in 2003, Miller has been a proud sponsor of the “Best Cinematography” award and prides itself on furthering students’ education by introducing them to easy-to-use, professional-grade camera support equipment as they continue to explore careers in cinematography. “I’ve already used the Air on a school project, and it is amazing to work with,” Morton adds. “Having a good tripod on set is so valuable, as it literally sets the shot. The Air pans and tilts so smoothly and very quickly adjusts, making it the perfect tool for my documentary production. I can’t wait to keep using it in the future!”

The light, compact and durable Miller Air Tripod System provides a solution for everyone, from entry-level to high-end cinematographers and photographers. The system comes in two varieties, with legs in either alloy or carbon fibre, and consists of an Air Fluid Head, offering professionals authentic Miller fluid head pan and tilt technology, and a variant of the Solo 75 2-Stage Tripod. The Air has the ability to support payloads ranging from 4.4 pounds (two kilograms) to 11 pounds (five kilograms).

As for Morton, she will continue to pursue her filmmaking passion and enjoy a hobby that she hopes can one day turn into a career. “In the next ten years, as long as I’m still making films, whether that is as an amateur or as a professional, I’m sure I’ll feel like a success,” Sophia concludes.