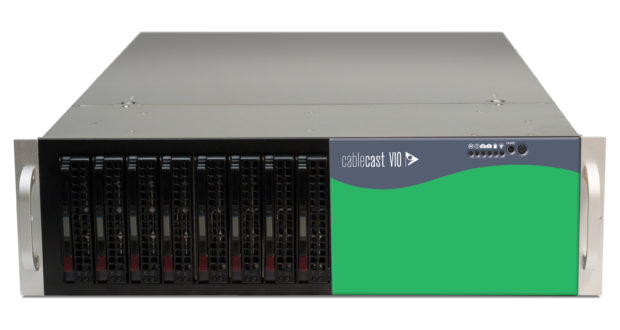 Cablecast VIO provides a powerful and reliable foundation for station automation, playout, branding and multi-platform content distribution. Users can take complete control of content scheduling, publishing and playout from anywhere, on any device, through an intuitive, web-based interface. The Cablecast VIO series amplifies the Cablecast platform’s efficient workflow integration by enabling more of its software options to run together on just one server, significantly lowering hardware costs while minimizing space, power, cooling and maintenance requirements.

Most notably, broadcasters can now operate their community bulletin boards on the same server that powers their scheduling, automation and playout. Each Cablecast VIO server can run multiple instances of Cablecast CG, the broadcast-optimized bulletin board software based on the Carousel digital signage engine.

The Cablecast VIO series further minimizes hardware requirements by delivering increased channel density. The flagship Cablecast VIO 4 Plus model provides six SDI interfaces that can be configured as four outputs with two recording channels, or as three inputs and three outputs. “This is perfect for PEG broadcasters with public, education and government access offerings, as they can run all three channels and their bulletin boards on one server, significantly reducing the overall system price,” added Israelsky.

Cablecast VIO’s extensive baseband I/O is complemented by support for live, IP-based inputs. Building on the RTP stream input featurefirst introduced on Cablecast Flex servers, Cablecast VIO can ingest live, H.264-encoded RTP, RTMP or HLS streams without needing an external decoder or consuming an SDI interface. Users can bring in live feeds of events such as council meetings and sports from remote sites over an IP network, or pull in sources such as YouTube or Facebook Live streams for integration into their channels.