As a UK-based A1 for the past decade, Chris Eckford has worked on some high-profile projects including the Premier League and the Amazon Prime Sport Premier League Games in December 2019. He says that in the past five years, a Calrec desk has been central to 90 percent of the projects he’s worked on. 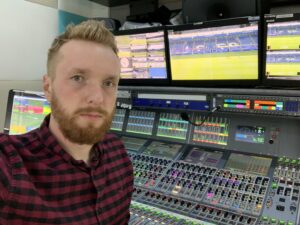 I started as a Trainee Sound Assistant back in 2010 at a company called Televideo based in Sheffield. I hadn’t even considered TV as a career at that time; it’s not something we studied in my Music Technology course at university. Within a year at Televideo I’d mixed in and acted as Guarantor in some of the smaller trucks and was determined to learn how to use the main truck they had at the time. Around 18 months into my time there I was sent out to mix/guarantee a Match of The Day for the BBC, which was a pretty big deal for me at the time. At this point, I hadn’t mixed any full shows, just football and rugby matches. One weekend we were short of crew and it was put out there that I would have to mix/guarantee a World Title Boxing show including studio coverage from the Royal Albert Hall. I was kind of thrown in at the deep end, but luckily, I was pretty happy with the results. After that, I was pretty much our main staff Sound Supervisor for the next four years or so. I had the chance to mix everything from Radio One Tours to boxing world titles and all of our in-house Sky and Premier Sports productions such as Netball, Ice Hockey, Basketball, and non-league Football.

By the end of my time at Televideo I was the company’s Head of Sound and then decided to leave to go freelance. As a freelancer, I mixed Match of the Day for the BBC, guaranteed the Great North Run, and mixed some of the British Superbikes races on Eurosport.

In 2016, I took the chance to apply for a staff Supervisor role at Sky Production Services and over the course of three years at Sky was lucky enough to work on Premier League coverage, the 2019 Ashes series and a couple of British Golf Opens.

Since going freelance in December, the majority of my work on the Premier League is match coverage, although the games for Amazon Prime were match and presentation out of one truck.

Being a football fan I’ve had the pleasure of mixing some of the biggest games in the country including Man Utd vs. Liverpool and the Manchester derby. The match truck coverage of a football game doesn’t really change too much from game to game. You might have more interview and arrival cameras to deal with on bigger games, but essentially, it’s commentary, stadium Atmos, pitch FX, and interviews.

The biggest change over the last few years has been the introduction of Dolby Atmos, but the coverage remains the same with the added addition of the heights. Personally, I do still flick back to the stereo monitoring quite a bit, because I know this is the format that the vast majority of consumers are listening in.

The first Calrec I used was a small M Series analogue desk that was in a small truck we had at Televideo. We also bought a truck that had an S2 in there. They were great sounding and easy to use desks. We then purchased two of the ex-SIS trucks, which had Sigmas and this was my first experience using Hydra boxes. It was such a gamechanger for me. I’d been using Studer for years and then when I got to use a digital Calrec desk it just seemed so much easier and more robust.

We used the M series and the S2 at Televideo before getting the Sigmas. It wasn’t until I started at Sky that I got to use the Apollo and the Artemis desks. As for what projects I’ve used them on, the Premier League has pretty much been exclusive to the Apollos, and more recently, one of the presentation trucks has an Artemis in there.

I would say that over the last five years, 90% of the jobs I’ve worked on have been with a Calrec desk. From projects such as the Netball World Cup to working in Sky News or mixing on the England Cricket Test matches, Calrec desks and equipment have been central to it all.

Last summer I was out in Portugal to mix the Nations League Finals on Sky. As a UEFA event and with numerous broadcasters, we were limited to the amount of stadium infrastructure that we could utilise. NEP has some of the Calrec Pelicase field boxes on board the truck. These were a massive help to the broadcast as it meant we could rig kit in some tight locations. This was the first time I’d seen or used these and thought they were a great idea.

Calrec desks are straightforward to use and very adaptable; you can walk up to one and configure it to your needs very easily. And if you need to add anything extra to your desk layout it’s really simple to do that.  Even something as simple as plugging in a Hydra box is easy; it being there within seconds is fantastic for productions where you might be required to move the presentation position.

When I think about technology and advancements, I always think more along the lines of practical solutions to make things better rather than from a more technical aspect.

That’s quite an interesting question for me. Coming from small broadcast facilities companies, I didn’t really experience a lot of the broadcast technology that was around at the time until I moved to Sky. Before Sky, I’d rarely worked in 5.1. But then to jump up to mixing in Dolby Atmos was a huge leap for me.

I think Atmos is the biggest change that’s happened during my career and I believe we are still in its infancy. I don’t know the figures on how many people at home have Atmos soundbars, let alone full Atmos setups, but this still gives us Supervisors the chance to experiment and work harder to create that immersive experience we are looking for.

One that stands out was mixing the Sky presentation on the 2019 Ashes series, and it’s not because of anything super technical; both the match coverage and presentation are done from the same truck and sound desk, but you hot swap with the match mixer. I wasn’t actually mixing at the time, but being onsite and part of the 2019 Ashes Test Match at Headingley when Ben Stokes batted the entire day and won the game for England was incredible. I’ve not experienced anything like it in a TV truck. England wasn’t expected to win and I think we had all readied ourselves for an early finish that day. The excitement and nervousness and then celebration just inside the truck itself was hard to describe, let alone the noise inside the stadium. I think it’s my most memorable day working in TV so far and will be a hard one to beat.

Mixing the first Premier League game that aired after the three-month break due to COVID-19was definitely a notable moment this year, especially with it being the first Premier League game behind closed doors. I don’t think I’ve gone that length of time without working since I was in college 20 years ago, so by the time the first game came around, I was definitely ready to get back to work.

From a technical point of view, a lot of the games were going to be covered by remote production; however, there was still a need to do some match-only traditional outside broadcasts. Aside from the social distancing measures in place to protect the crew, the coverage was essentially the same. The biggest difference was the interview positions;normally these are just one microphone and the VT department have the ability to ISO record them. But because of social distancing protocols, we had to use two mics for the interviews and be able to sub-mix these into VT. This was really easy to achieve. Using the track outputs on the Calrec, we fed the incoming microphones to a track output then had that track as a fader on the desk to allow us to control the levels and also be able to route them out to the World Feed.

I suppose the biggest challenge was mixing a game without a crowd at all in the stadium. In the past I’ve mixed lower league football but you still might have a couple of hundred fans in the stadium. I think the word I’d use to describe my mix on this game was ‘tentative.’ I was very conscious about the language that might be audible from the pitch microphones and with no crowd noise to hide that, I was very conservative with my mix. We did need to think about ‘crowd’ microphone placement too because there was a concern that commentary might be picked on the surround sound microphone. To combat this, we had a stereo crowd mic rigged at the far side of the stadium away from commentary that could have beenblended in with the surround sound microphone if needed.

It has been quite a nice challenge to mix a football match without a stadium full of people cheering along. It definitely gives you a new perspective on your mixing.

Like the rest of the TV industry, remote working is going to be the way forward for audio. I don’t know what that means for a Sound Supervisor that lives in Yorkshire unless Calrec fancy installing a desk in my spare room!

With audio and especially working in OB trucks, there’s a big drive to reduce costs and carbon footprints. I think this will only drive more productions to become remote and manufacturers will have to put a greater focus on delivering stable and cross-compatible solutions. 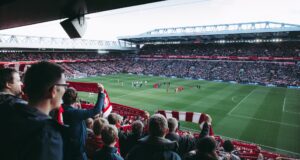 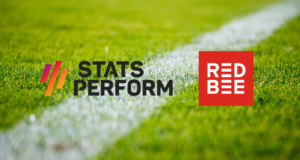 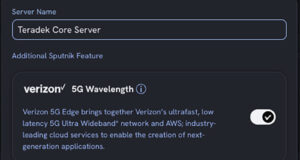 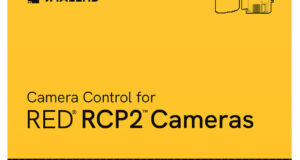 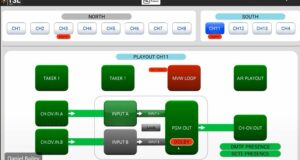