Raul Felipe is a skilled audio engineer who began his audio career in music production. He first began working on a Calrec Artemis five years ago where he learned about signal flow and routing for audio broadcasting. He also uses the Calrec Summa; read on to find out more about his current role at Televisa Univision in Miami, Florida, and what he loves most about working in professional audio. 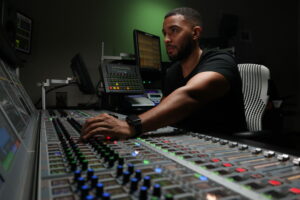 1. Tell us about your path to professional broadcast audio; how did you get started and what drew you to the field?

My path to broadcast audio began on the music production side. I attended Miami International University of Art & Design and earned a bachelor’s degree in audio engineering. While in school I interned at The Setai Recording studio run by Chief Engineer, Matthew Knoble. This is where I got my first bit of real-world experience working in a recording studio. I was able to assist sessions with major label artists and actually see how professional studio sessions are run.

After completing my degree, I landed a position at another well-known commercial studio in Miami, Circle House Studios. Here I began as an intern but quickly moved up to Assistant Engineer, then lead assistant engineer, then finally becoming a staff recording engineer. During this time, I gained a lot of experience in music production working on major label artist projects.

Along the way I got the opportunity to work on Grammy-nominated and winning albums. I was also awarded one 3X platinum plaque and a 2X platinum plaque for working on hip-hop artist Kevin Gates’ songs “Really Really” and “I Don’t Get Tired”. It was around this time that I wanted to learn about television and film and wanted to get my break in live TV.

2. How did you become an Audio Engineer at Televisa Univision?

An opportunity came up around 2017 when one of my friends who was working at Televisa Univision told me about a chance to work as a weekend A1 for the local affiliate news channel 23 Miami. I was hired for the position and had the chance to start learning the technical aspects of becoming an audio broadcast engineer.

3. When did you first start working with Calrec and for how long have you been using their technology? Why do you like using their audio consoles?

I first started working with Calrec technology around 2017, when I used an Artemis desk for my first audio broadcast position. The Artemis showed me all about signal flow and routing for audio broadcasting. Bringing knowledge of working on SSL consoles and Neve recording consoles, I noticed right away with the Artemis that the sound of the console mic pre’s EQ and compressors were very clean. I also found the signal routing and signal processing flexibility to be very adaptable on-the-fly when you are live on air.

Univision Network News shows and lead on their new online Streaming Newscast. What exactly does this type of work involve?

I go through the rundown the director has created. Based on the show’s needs, I’ll then speak to my show’s floor manager to let them know which mics and IFB combinations I will need and what the show will require for each individual segment. I will base everything on how much movement we have and how many guests we have per segment. If I have a segment or breaking news with a translation, I will set up all requested mix-minus and ISO recording sends and fax out all levels. Then I will work with the technical production coordinator to discuss the live satellite feeds for any live reporter on the show. I then patch the live feeds into one of our Calrec consoles and process them with EQ and compression so that they are at the broadcast-quality level.

Also, since we do streaming-based programming, we get a lot of interviews via Skype and Zoom. If I have time, I check the source for any image/audio syncing issues and if I find anything, I will dial in the needed delay amount either by frames or time on the audio path. After that, I establish communication with our internal studio to do one last fax for microphone levels and fold-back mix levels for each anchor.

5. What features do you need from a broadcast audio desk? What differentiates Calrec from other console makers in the industry and what are your favorite things about using the Artemis and Summa?

One of the main features that I really value in an audio broadcast console is the ease of patching and routing on-the-fly. Due to the fast pace spontaneous nature of live network news, being able to route and patch live satellite feeds or incoming live translation on air within seconds is really handy.

What makes the Artemis so unique is that it allows me to do everything internally from the comfort of the mixed position. I don’t need to get up and go to any patch bay to start the routing signal. Because of the quick nature of the internal routing, I save a lot of time. I can adapt to the changes quickly without worrying that I’m sacrificing my attention to the live mix of the show. I’m also a fan of the Summa’s touchscreen parametric EQ and compressors.

6. What Calrec features do you love? Can you please give an example or two where the Artemis/Summa features stood out and really helped you get the job done?

In 2020, I was working on a live US House of Representative debate. One of the candidates was bi-lingual and spoke English and Spanish and the other candidate spoke only English. Due to Covid she was going to do the debate remotely from her home.

The bilingual candidate came into the studio for the debate. As with any debate, we had a moderator and also had two translators, one for on-air translation and the other for an in-ear translator for the English-speaking candidate. Both translators were remote; one was in Miami and the other was in Los Angeles. So, simultaneously I had three (pre-fade) mix-minus foldbacks and two regular foldback mixes to manage in addition to the on-air mix.

I was able to have three independent level sends to each mix-minus (pre fade). So, when the candidate assigned to track send A needed more gain of the in-ear translator, I would quickly go to that source and increase the A send, which would not change the level for B or C. I would do that for any level adjustment.

I condensed the sends to the mix-minus to just three level sends with one quick move. It granted me more time to focus on the on-air mix for the debate.

7. How is COVID-19 affecting your work at the moment? How has it significantly impacted a recent project that you’ve done?

COVID-19 affected our workflow tremendously, especially when we had lockdowns and fellow co-workers were quarantining. There was a point that all of our anchors and reporters were all remote from home. We had to do the newscasts via multiple LiveU field units transmitting to the studio. Once my technical production coordinator had all the signals routed into our PCR, I managed all the audio sources well with the Artemis and it was business as usual for me.

8. How do you see audio evolving in the next five years and where do you see yourself?

I see audio shifting over to AoIP as being the standard in audio and video system design and networking. I believe the recording studio profession will still maintain the analog consoles and analog outboard devices in the first steps of the signal chain. But once the signal enters the digital domain, many audio engineers will see the flexibility of AoIP. This is especially true when they are trying to combine and manage a multi room facility – it will save time and space.

At the moment, I’m working on obtaining my Dante certification. Eventually I would like to run my own A/V company where I facilitate audio and video system designs for broadcasting and entertainment events. I am also planning to study software engineering with a focus on audio programming and DSP. I would be interested in creating audio plug-ins for music production or to be a part of the immersive spatial audio for the Metaverse and gaming worlds.