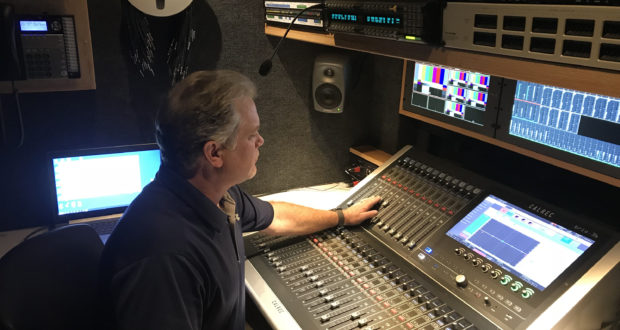 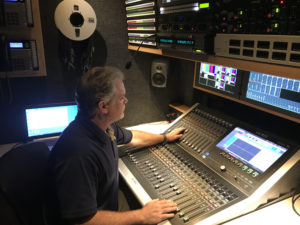 Each of Rush Media’s new mobile units are custom built, 40 ft. straight trucks with expanding sides. Each truck includes eight camera control units, two 8-channel replay servers, two graphics generators, a 36-input switcher, a 48-port communication frame and a main truck router with full audio capabilities. “The Brio36 is the perfect fit to bring all of the equipment elements together, in a limited space, with no other console at this price point coming close,” says Rusty Cummins, Senior Engineer, Rush Media.

The Brio36 provides 36 dual layer faders and by using its Hydra2 expansion port, Rush Media was able to double the size of the console’s I/O. Utilizing MADI in and out of the truck router, provided the company with more than enough paths and fit perfectly in the space available.

“The Brio36 has many functions that I’ve used in the past with larger Calrec consoles,” adds Cummins. “With high frame rate cameras being a standard complement on our trucks, delay on every input and output is a must. Also, the Hydra2 network has made it easy to expand the I/O and network multiple desks together.”

Rush Media’s newest Calrec Brio36 equipped mobile unit is being used for all home and away broadcasts for a major league soccer team. The home broadcasts require multiple transmission feeds with unique audio assignments, as well as providing the visiting team with separate field FX microphones to be used for their broadcasts. According to Cummins, the combination of extra I/O provided by the Br.IO wallbox and MADI to the truck router makes it easy for the operator to provide these feeds.

“Our job became a lot easier once we made the switch to Calrec, with both integration and implementation,” adds Cummins. “With various engineers using the console from show to show, ease of use is really important. The Brio, as with all Calrec consoles, is built for broadcast. With the Brio36, the user is up and running a few minutes after sitting down. We are planning to add more mobile units to our fleet next year and additional Calrec audio consoles will be included in this expansion.”

Rush Media offers a smaller, cost-effective alternative to the full budget, larger footprint mobile units that have been a staple for regional and national sports networks, and is a producer of live sports broadcasts as both a packager and truck provider for numerous networks, including Fox, CBS, NBCSN and ATTSN.

“Rush Media chose Calrec consoles to outfit its fleet due to the reliability and industry user familiarity with our products,” says Helen Carr, regional sales manager for Calrec. “We are happy to be incorporated in this new expansion and look forward to continuing to work with Rush Media in 2019 as the company adds more mobile units to its fleet.”

Calrec Audio is exclusively dedicated to excellence in audio mixing for on-air and live production. A broadcast specialist for more than 50 years, Calrec has developed a range of digital consoles relied on by the world’s most successful broadcasters. Increasingly consoles are integral components on a facility-wide networks, giving rise to adaptable workflows, shareable resources and the ability to be easily expanded. From the very beginning, Calrec has created innovative solutions that have allowed broadcasters to develop their working methods and get greater value from their equipment. For premium audio solutions, broadcasters put their trust in Calrec. More information is available at calrec.com.