Hebden Bridge, 15th December 2021 — Two Calrec Artemis consoles with AoIP ImPulse cores and Gateway technology lie at the heart of the audio setup at Sportsnet Studios, the new immersive facility in Toronto that’s part of leading sports media brand Sportsnet, part of Rogers Sports and Media (RSM). The Calrec technology is an integral part of the audio workflow to provide Sportsnet with the flexibility it needs and facilitate easy expansion in the future. Calrec’s Canadian partner SC Media played a pivotal role in the project. 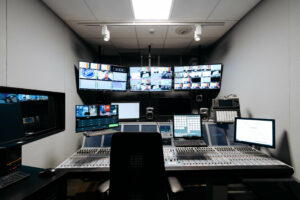 As unveiled in October 2021, Calrec consoles are being used for every NHL on Sportsnet broadcast, including Hockey Central pre-game shows, plus other live Sportsnet programming. Jim Morrison, P.Eng, Strategic Advisor, Media/Snr. Media Architect for RSM and technical lead on the project said, “We are familiar with Calrec from our first Calrec console installed at Rogers Sports and Media some years ago. We started down the SMPTE 2210 IP path back in 2017 and these innovative new sports studios were the logical next step. From a technical standpoint, Calrec supports AoIP very well, which fits within our media over IP strategy. Using Calrec stage boxes provides full flexibility when working in the non-IP environment as well.” 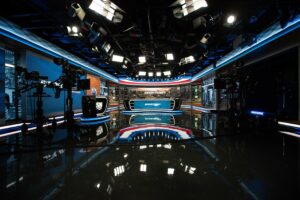 To support Sportsnet Studios, the two Artemis consoles and ImPulse cores are spread across three separate buildings and over multiple floors. There are two audio control rooms and several Calrec stage boxes deployed between the two studios. Each audio room has its own signal breakout from AES, DANTE (used for intercom), and analog signals.  Each room is also integrated with the existing Calrec console and studio boxes, used elsewhere in the facility, via a Calrec H2-IP Gateway.

Kypros Christodoulides, Technical Sales & Support at SC Media said, “Sportsnet’s requirement for native AoIP consoles with serious processing power and a distributed SMPTE-2110 I/O network led directly to Calrec. Its Artemis consoles, with ImPulse IP cores, are designed for this modern workflow. The installation and commissioning of this system was quite challenging, not only because of the new technology but also because of its scale and physical layout. And, of course, everyone adhering to Covid rules. Through Jim’s lead and everyone’s hard work, an eye-catchingly successful outcome has been achieved.”

Morrison added, “The advantage of IP is flexibility. IP allows all facilities to have a common core and common distribution mechanism for essence streams, with all deployed based on industry best practices and standards. We know the systems we have implemented have more capacity than we have yet taken advantage of. Also, we have a great relationship with SC Media from past projects and they were extremely supportive on this project from day one.”

Dave Letson, Vice President of Sales at Calrec said, “Having Calrec technology central to a space as sophisticated as Sportsnet Studios is a real honor and a testament to our Artemis consoles and ImPulse cores. Calrec kit is designed to support however broadcasters want to work, and this project illustrates this well as Sportsnet combines our new IP technology with older legacy products.”